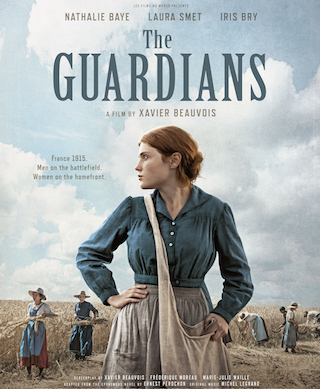 AN EXQUISITE TALE OF LOVE, LOSS, AND RESILIENCE FROM ACCLAIMED DIRECTOR XAVIER BEAUVOIS

Chicago, IL (July 10,2018)  – A stunning portrait of a family trying to maintain their culture and traditions as war rages around them, the graceful historical drama THE GUARDIANS is the latest offering from the acclaimed French filmmaker Xavier Beauvois, whose previous films include the award-winning Of Gods and Men and The Price of Fame.

THE GUARDIANS is the story of the Paridier family and their farm in the French countryside, where life revolves around everyday chores that service the farm’s seasonal cycle of planting and harvesting. With the breakout of World War I in 1915, the women of the Paridier farm, under the deft hand of family matriarch Hortense (Nathalie Baye), must grapple with the workload while the men, including Hortense’s two sons, are at the front. Hortense reluctantly brings on an outsider, the hard-scrabble teenage orphan Francine (Iris Bry), to help her daughter, Solange (Laura Smet, Baye’s real-life daughter). New tools and technology allow the women to triumph over the land and newfound independence is acquired, yet emotions are stirred, especially when the men return on short leaves. Regardless, it is the Paridier women who are the “guardians” of their land and its traditions.

Adapted from Ernest Pérochon’s 1924 novel, Beauvois’s elegant work, luxuriously shot in widescreen by his go-to cinematographer Caroline Champetier, revels in the mysteries and beauties of the French countryside, here unravaged by the turmoil of war. Filling THE GUARDIANS with painterly images bathed in luminous, natural light, Beauvois nevertheless maintains his focus on the intricate drama that plays out against the upheaval of the Great War.

Nominated for four César Awards, including Best Cinematography (Caroline Champetier) and Most Promising Actress (Iris Bry), among other highly regarded international nods, THE GUARDIANS will be released on Blu-ray, DVD, and VOD (iTunes, Amazon Instant, Vudu, and YouTube) for the first time on August 28, 2018 (prebook July 24, 2018). The Blu-ray and DVD, which include interviews with director Xavier Beauvois and cinematographer Caroline Champetier and an alternate ending, among other bonus features, carry a suggested retail price of $34.95 and $29.95, respectively.

At Rotten Tomatoes, THE GUARDIANS holds an outstanding 93% Fresh rating, based on 38 published reviews, with Beauvois receiving much praise for maintaining the uniquely classical style for which he is recognized, an approach that served him well with his César-and Cannes-winning films Of Gods and Men (2010) and Le petit lieutenant (2005). The film’s lead actresses, French cinema doyen Nathalie Baye and debuting actress Iris Bry, have also been universally lauded for their star turns in THE GUARDIANS, with A.O. Scott of THE NEW YORK TIMES declaring that “Ms. Baye, one of the great living French screen actresses, is steely and magnificent, even as it is Ms. Bry who finally captures the film’s energy and the sympathy of the audience.”

A rare cinematic work that focuses on the home front and the women who keep the family and its traditions flourishing in time of conflict, THE GUARDIANS is truly a war film like no other.