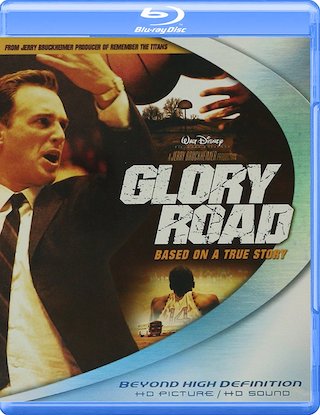 There is something to be said about sport movies that are based on history, which is that all these stories seem to have certain parts about them that audiences eat up. Maybe it’s that they all contain moments where man is overcoming insurmountable odds. After all, no one wants to see a movie where someone fails at the end. Films like Friday Night Lights, Remember the Titans, and Rudy all are perfect examples of how you define a sport movie. Each film contained a certain message of hope, persistence and courage in that one should keep up the fight never giving up. The recent film “Glory Road” from Disney combines all these elements into a film that is great.

The true story in Glory Road is about a man named Don Haskins (Josh Lucas) who, in 1965, went on a recruiting trail grabbing all the best talent he could up and down the country. The most important aspect, especially considering the time period, is that Haskins didn’t care about race. He simply wanted men who excelled at basketball. Haskins ended up picking five white and seven “colored” men who would eventually make up the 1965-66 Texas Midwestern Miners. Naturally this would be a true story if this team wasn’t ridiculed, mocked, tortured and laughed at, either by fellow students or the media, would it? As one can assume the team eventually goes on to achieve many great victories including winning the National Championships. Sounds like the perfect type of heartwarming, ‘awww’, type film. But what surprised me was that Glory Road was actually a great film.

The film succeeds because it simply gives the message that anyone can succeed, regardless of ethnical differences, as long as they’re determined to succeed. Of course films like this are extremely predictable, but that doesn’t really matter here. As the audience, we’re never really surprised by anything that occurs on screen, but we really shouldn’t be. Films like this follow a very formulaic position. You have the coach who is brought in to help gain the popularity/fame that the school once had. The coach puts together the team, the team has no interest in trying at all, the coach gives that big, heart-inducing speech, and then the team starts working as one cohesive unit. And this is exactly what occurs in Glory Road. But what makes the film succeed, where others like Coach Carter have failed, is that all the characters, while being stereotypes, are enjoyable in their own rights.

Josh Lucas does a fine job here as he always seemed to present himself as a commanding figure never letting his stars get the best of him. The leader of the team Bobby Joe Hill (Derek Luke) is naturally your super arrogant ‘I’m the best and better than the rest’ team leader. Willie Worsley (Sam Jones III) serves as the team’s support as his goal is to keep the team together. The rest of the characters feature your typical partier who doesn’t want to do anything but party, and your speaking before called on guy who doesn’t think. Yes, these characters are all stereotypes that have been seen countless times before. But what made this time around the track different was that I actually cared for and wanted these characters to succeed almost acting as a coach on the sideline in my living room rooting for them.

Glory Road, flat out, surprised the hell out of me. I went in, especially considering Disney’s previous track record, and I came out extremely pleased. The story, as per the typical sports movie, has heart, emotion, and character. However, Glory Road differs in that it actually has a fine case of actors portraying these typical features. Add in that the film uses a lot of interesting period accurate details, and you come out with quite the fine sports film.

Presented in a 1080p, AVC/MPEG-4 Encoded, 2:40:1 Widescreen Aspect Ratio, Glory Road, is one of the best-looking transfers I’ve seen thus far out of Disney (I’ve only seen 4 titles so far out of the two waves).

Considering the fact that this film was released earlier this year, one would expect that the film’s print would be in almost immaculate condition. Such is the case here as there is little to no dirt, grain, pixilation or any real eyesores on this print. The itty bitty little grain that is present, one can assume, was added in to give that 1960s era look to the film to add in the historical aspect. Color usage was also excellent. A lot of the scenes are bright, almost a golden type brightness (particularly Haskins’s office), giving the film a fine realism. Blacks are bold and defining and while white, the only real negative color here, doesn’t look as good as it could. Some of the sequences seemed washed out. Now this may have been done as, similar to the little grain, as a historical aspect to the film.

Detail on the film is great, in fact so great that I could make out skin pores, beads of sweat and individual detail on each player’s head. Talk about detail! The only real negative of this transfer, and not a completely gigantic negative, is that some of the bleacher sequences in the gym seemed almost like they were jumping out creating a noisy type effect on the screen. Congrats Disney on producing a fine transfer.

Dialogue is clear and clean throughout the film coming out the center channel in your system. The film’s use of surrounds, while not extremely heavy, did seem quite enveloping at times. Particularly fine scenes of good surround usage were the roaring basketball games and some of the bus sequences as the team traveled from game to game. Dynamic Range is powerful and packing. Bass is low for a majority of the film. When it does kick in, again during the games, the bass forces its way out creating that necessary supplement to the cheering. The film’s score by Trevor Rabin, is perfectly captured here via scenes of low, soft bass that almost hums along creating the perfect experience. I was also extremely pleased, considering I had this problem with some other titles, that I never once had to adjust the volume to compensate for balance problems.

While it would have been nice to see more of the standard definition DVD features brought over here, the two provided audio commentary tracks were interesting.

While the provided features were not the best available (even though the commentary with Gartner was interesting), Glory Road still comes recommended as it boasts a fine story, great video, and good audio.