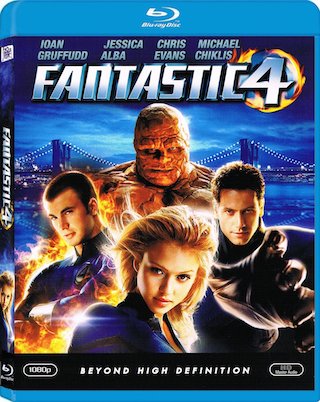 It surely didn’t take a lot of time. After the success of Spiderman in 2003, studios decided to bring all our favorite comic book heroes to the big screen. Some met with success like Batman Begins, while others, like The Punisher, despite being good, with nearly dead on arrival. Everyone expected a film on the famous Fantastic Four from Marvel Comics. With a cast including Jessica Alba and Michael Chiklis, I figured Fantastic Four would be a fun, popcorn filled blast. Such isn’t the case here.

“Fantastic Four“, the 2006 film, for those of you who haven’t read the comic books, tells the story of a brilliant scientist named Reed Richards (Ioan Gruffudd). Richards needs financing for an ambitious project to study the effects of cosmic rays. When he can’t get the bucks anywhere else, he comes hat in hand to the door of his old college rival, billionaire Victor Von Doom (Julian McMahon). This becomes doubly humiliating when we meet Victor’s head of genetic research: Reed’s old love Sue Storm (Jessica Alba). After he negotiates a tidy potential profit for himself, Victor agrees to finance Reed’s experiment and let Richards use Von Doom’s space station. However, he does insist that he and Sue go along and also that her cocky brother Johnny (Chris Evans) flies the shuttle. This doesn’t sit well with Reed’s partner and pilot Ben Grimm (Michael Chiklis), especially since Johnny bombed out of NASA under Ben’s watch. The mission runs into a problem when a blast of cosmic ray hits our heros. Soon the participants discover side effects of their experiences. Johnny turns to flame without warning, and Sue can become invisible. Reed can stretch any part of his body to extremes, while Ben develops into a super-strong rock-like being. Finally, Victor begins to become metallic/gains some serious electrical powers. The movie follows their attempts to deal with their changes and what they do with them, a subject that becomes more serious when Victor goes nutso and acts in evil ways.

How can a movie with so many cool characters and so much action end up being so incredibly dull? That’s the main problem with Fantastic Four. It presents all sorts of potentially exciting scenarios but never does anything satisfying with them. It plods along with loosely connected situations and fails to tie them together in a cohesive or compelling manner. The director’s name, Tim STORY, seems particularly ironic given his extreme inability to actually convey a story. In truth, Four often feels like a really long trailer. It presents bits and pieces of narrative but rarely dallies long enough to explore them. We get snatches of plot at most, but nothing that ever becomes overly coherent. Some of that stems from the fact that Four needs to introduce and establish five major characters.

None of this excuses the exceedingly clumsy plot development even after the movie sets up its characters. We know Doom is upset that his company goes in the tank, blames Reed and wants revenge, but all of this simply turns into an excuse for mayhem. The action becomes oddly irrelevant, as the movie can’t tie together the pieces well enough to make us care. As for our actors, only Evans and Chiklis make an impression. Alba certainly looks great, but she clearly lacks the presence and weight to make us accept her as a genetic researcher. It doesn’t help that at 24, she’s way too young for the role; she should be in the middle of grad school, not leading the way in her field. Gruffudd is also surprisingly young for his part, but at least he looks older. Though he looks the part, he seems lost in the role. At least Evans fills out the role of cocky hotshot Johnny. He provides some of the movie’s few amusing moments with his arrogance and brashness, and he and Chiklis also demonstrate a nice chemistry. Chiklis is able to bring some humanity to his role, no mean feat given that he must do so through a thick layer of laytex. A couple of decent performances can’t redeem this dull movie. Fantastic Four certainly had a ton of potential, and perhaps its sequel will manage to become more satisfying. I sure can’t imagine the sequel will demonstrate a dip in quality, as this flick is a snorefest.

The film’s print benefits from a recent release as it contains no real evidence of dirt, grain or pixilation. Color usage is also great as the darker blacks give the film a nice sense of detail. Normally films like this would go with a basic ‘comic book’ use of colors. Fantastic Four used more of a golden, somewhat subdued palette, which was a nice touch on Fox’s part.

There was a bit of edge enhancement, but these failed to affect sharpness. The movie consistently appeared crisp and detailed throughout. It presented a nicely tight image at all times and lacked any indications of lessened definition. A slight possible problem for some may be that some sequences, particularly the laboratory sequences, felt a bit too dark lacking any sense of detail. I only noticed this here so I can’t really call it a huge disappointment.

Fantastic Four is part of Fox’s first (finally!) wave of titles to hit the Blu-ray format. If this transfer is any sign of what Fox is capable of, I look forward to other titles. A solid job here Fox.

Equipped with a English a DTS-HD 5.1 Master Audio lossless track. Despite how appealing this track sounds, no player at this time, besides the Playstation 3, comes equipped with the ability to decode this audio. Once I get my hand on a system, I’ll be sure to update this review with my thoughts. Despite this, we do still get a nice DTS track encoded at 1.5mbps.

It’s not a fault of the audio, mind you, but a conscious decision by the filmmakers to fill almost every moment of audiovisual space with something loud and booming. We do get the standard helicopter flybys, explosions, rocket blasts, and water splashes in the surrounds. Speaking of all these effects, the soundfield in the film was excellent throughout creating a real sense of a ‘you’re there’ feeling. As The Thing pounds and yells, I wondered if he was outside booming and pounding.

As I mentioned above with the example of surround usage, I was quite impressed with the deep bass all the surrounds produced. The bass hit just the right note during the quieter sequences and definitely boomed during the more action packed scenes. Dialogue was also well placed with no real evidence of muddled performance.

If this is what the ‘downgraded’ DTS audio track sounds like, I look forward to the DTS-HD track. Another solid job here Fox.

Besides the film itself, this is the huge disappointment of the disc.

Given my affection for Marvel superheroes, I hope that the second Fantastic Four movie improves upon this one. I doubt it can be worse than this dull, thin dud as the film lacked any spark or excitement. Despite containing a great video and audio presentation, I can’t imagine even the biggest fan wanting to purchase this, as this disc is just way overpriced for what you get. I do realize that Fox chose a BD-25/MPEG-2 transfer, but why not include another disc full of features? Stick with a rental on this one just to view the V/A.