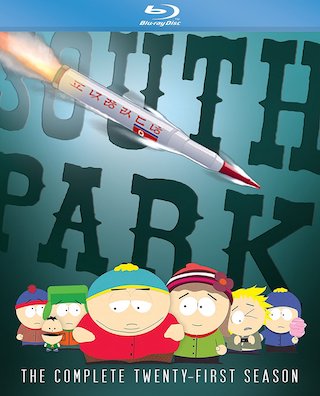 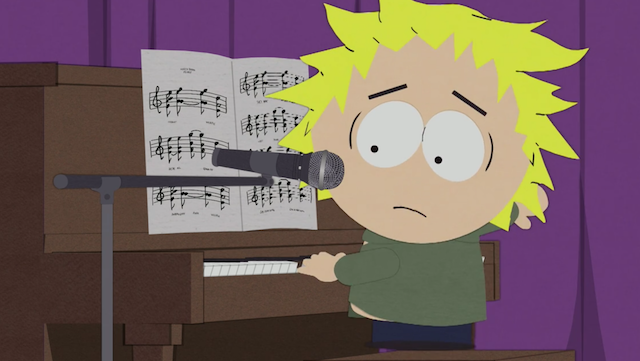 “South Park” first aired in 1997 on Comedy Central, and since has become one of the longest running animated shows – among the likes of shows like “The Simpsons” and “Family Guy.”

EDITORIAL NOTE: Now, I’m going to let my co-writer, Brendan Surpless, and fellow fan of the show discuss some of this season.

In specifics, this 21st season deals with a few recurring themes covered in the 20th season, specifically that of Tweek & Craig‘s relationship, Cartman and his on-and-off again struggle to decide whether he loves Heidi, as well as the ongoing parody of Trump via “Mr. Garrision.” While the season does have these themes picked up once again, one aspect of the season (not a fault) is the somewhat lack of topical parody.

By topical parody, “South Park“, possibly, became popular not only due to its gross-out humor (really only first four seasons) but also due to the fact that the series lampooned whatever was the ‘hot button’ topic in the world (heck, I even remember watching a ‘making of’ a few seasons back where Matt and Trey admitted they wait until the last moment to finish an episode, in order to be as topical as possible).

While they don’t have this type of approach, there’s more of a sense of continuity throughout the past few seasons. Perhaps due to the aforementioned topics covered, this definitely feels like the type of season you just don’t want to jump into. That, personally coming from a fan who watched since the 1st episode aired back in August of ’97, makes this season one of the stronger seasons in recent time. – Brendan Surpless

Ok, now back to me [Justin]. I have to totally agree with everything Brendan has said above about this show. Over the course of our friendship and working together almost a decade now, this show has remained one thing that we would always discuss, and both loved. That’s why I felt like sharing this review in some way with my brother from another mother, Brendan.

I was thinking myself. There’s some reasoning to why this show remains so funny and why we occasionally get some guest voice actors with stand out characters. The reason is that the show has some great consultants in comedy, like (former SNL cast member) Bill Hader, as well as Josh Gad. Yes, Josh Gad from that Disney movie “Frozen.” No shit! Josh Gad actually gives a totally cool performance as the voice of the “Marcus” in the “Hummels & Heroin” episode this season. I wasn’t even aware he and Hader work on the show but kept seeing Josh’s name reappearing in the end credits as they flash by. Turns out Bill Hader has actually worked off & on the show as a consultant dating as far back as 2008. This explains why it’s so damn funny and never has stopped being funny: Trey and Matt continue to surround themselves with great creative minds.

In further dissecting this season of the show: the voice acting for the cast of characters, even voiced mostly by just Trey and Matt, never miss a damn beat – nor have they over the course of over two decades now. A lot of the voices though are done by others like the reoccurring characters voiced by folks like April Stewart (as “Sharon Marsh” / “Liane Cartman“), Mona Marshall (as “Shiela Broflowski” & various characters), Jennifer Howell (as “Bebe“), Adrien Beard (as “Token“), and even the newcomer characters like Jessica Makinson (as “Heidi“) and Elisa Gabrielli (as “Heather“).

I just feel these voice actors really never are given enough respect. There’s only so much those fast ass credits can even accomplish at the end of episodes. Thankfully we have things like IMDb and Google these days, yet I still have to write about it to make you go look it up. Regardless, the show still kicks ass this season and yeah! I’m absolutely loving the fact that Comedy Central via (Paramount) has continued to release this show Hi-Def on Blu-ray Disc for now a good, what, 8 seasons or more? I’ve honestly lost count, and been out of the game for a couple years.

All that said, it’s very safe to say “South Park: The Complete Twenty-First” season proves to be absolutely hilarious. 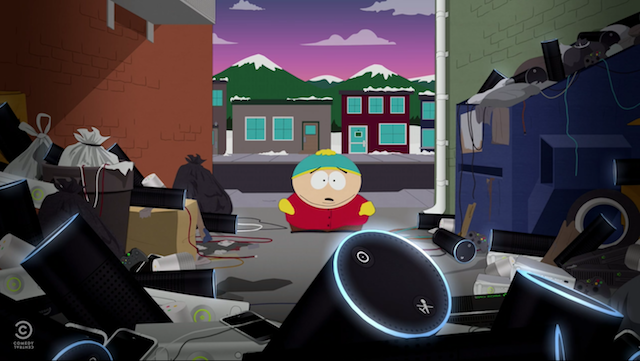 The twenty-first season of the show comes to Blu-ray Disc presented in 1080p HD via the 1.78:1 aspect ratio, that fills the entire widescreen. This has been that way for “South Park” for about 8 or so years now, since the show went Hi-Def.

Now, as usual with this type of animation in HD it looks absolutely gorgeous on Blu-ray. It and some shows like “The Simpsons,” “Family Guy,” and “Rick and Morty” all translate over extremely visually pleasing in HD when released to home video. There’s a reason for why animated shows look better on Blu-ray. That’s because you are seeing a less compressed MPEG-4 encode than what is seen in the original TV broadcast. That means you get less pixilation, less digital artifacts and other compression visual issues, resulting in a sharp crisp picture – that is, most all of the time.

The show has as solid of a black level possible for its animation style, however unlike most animation, its paper look doesn’t depend on black outlines. The color palette on the show is very vibrant pretty much 99% of the time. That’s all enough to just make for an almost damn near perfect visual Blu-ray presentation. That being said, I sadly did occasionally see some compression artifacts and noise – as pictured below: 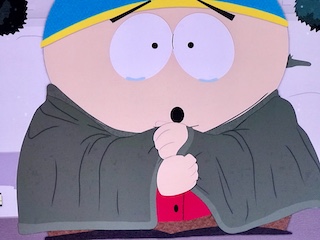 I can’t say it’s 100% perfection but it’s close. It’s the best it’s going to look on Blu-ray and I will admit that compression was only an issue a very few times in this season. I cannot decrease the rating either for just a few occasional bits of compression that some settings on your TV or Blu-ray player will fix, and cover up. And in all honesty: most consumers will likely never even notice or complain about these type of things. I just decided to be pretty thorough and noticed while watching it up-converted to 4K on a Samsung 4K TV and UHD player. 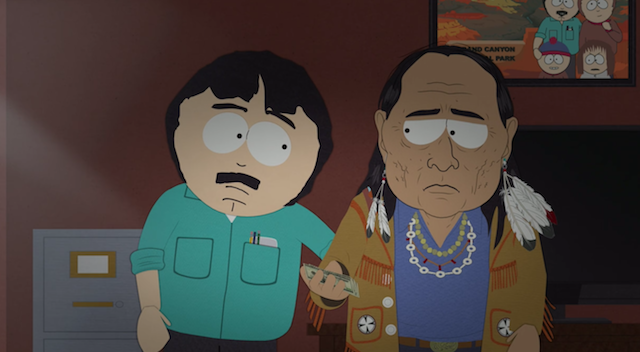 Audio here is presented in both a lossless Dolby TrueHD 5.1 track and a basic Dolby Digital 2.0 Stereo mix (as heard on TV broadcasts). This is sure to please all types of fans, be it the ones using their TV speakers (gag…), soundbars, and such but it will especially excite those on an AVR capable of TrueHD and on a 5.1 speaker set up. There’s one reason for why that is. As much surprise as this may come to some of you, “South Park” receives amazing musical scores, much akin to “Family Guy.” Because the show has such remarkable and movie-like music composed (scored) it translates to some intense 5.1 lossless mixes over the seasons that have been released so far to Blu-ray Disc. This twenty-first season is no exception, what-so-ever, as it packs one hell of a punch.

There’s near perfection here in 5.1 TrueHD, as dialogue is mixed to the center channel speaker, never once being overwhelmed by the music or sound effects, and such. Then you have the front channels pushing the heavy part of the musical score and sound effects, as well as heavy usage of the two rear channels for music and sound effects. When necessary, there’s a good amount of bass you’ll hear coming from you subwoofer.

I swear, you’d never think a show like this would contain such an impressive surround lossless mix, but it does, and in fact has for a good while now over the course of the seasons to be released on Blu-ray. That being said. I’m once again impressed. For those of you who find the 5.1 mix a bit “overkill” or excessive, rest assured that there is the (compressed, lossy) Dolby Digital 2.0 Stereo mix as an option.

Also worth noting you’ll get some cool music on the episode “Hummels & Heroin” when Killer Mike (of “Run the Jewels“) does a few songs with Trey, which sound excellent in the 5.1 mix and hit your ass hard. 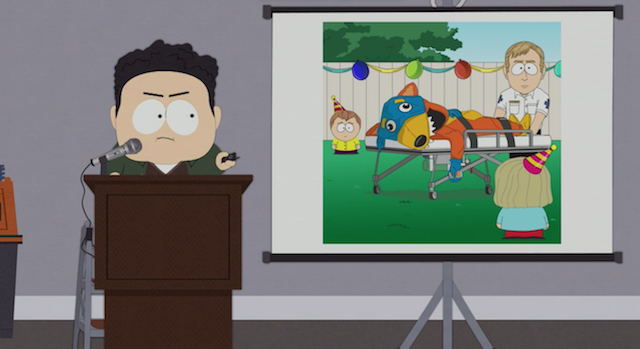 Yet another season comes to Blu-ray Disc and sadly again we fail to receive any digital copies of the season episodes of the show at all. Once again, I repeat, NO DIGITAL COPY. This bums me out. I travel sometimes, and I like to have access to them on the go. I shouldn’t have to go buy them when I already own them if I want them on my portable devices, laptop or such.

Bonus materials are on both Blu-ray Discs in the 2-Disc set. They are as follows:

For those unfamiliar with how things work in terms of bonus materials on “South Park” Blu-ray releases, let me explain. It goes like this. The audio Mini-Commentaries on episodes have the guys (Trey & Matt) giving thoughts about the particular episode right after the show’s opening. Then as quick as you know it they’re gone about 4 or 6 minutes into an episode and you’re left watching it in stereo, all by yourself like Celine fucking Dion. It just seems it would have been better to do these as short video segments with highlights from the episode and the short commentaries.

But, then again maybe that’s just me trying to think of something that wouldn’t result in me having to take myself back to the menu after each episode mini-commentary is basically over 6 minutes in. Sorry, not sorry!!

The #SocialCommentary on episodes are comprised of a bottom bar that runs during the episodes that pop-up tweets giving you facts (trivia of sorts) from South Park Studios and/or Comedy Central themselves about the show. For instance, here’s one:

Mr. McCormick and Mr. Broflovski have been friends since they were teenagers as explained in season 2’s ‘Chickenpox’.

Tweets from fans are NOT included, don’t think social that way, think they tweet pop-up facts in real-time as the episode airs and put it in a bottom bar that comes in and out. It’s kinda neat and they actually air these on Comedy Central this way sometimes as fans will know.

Still, that’s not really a lot of bonus material and the lack of digital copies of the season is a major bummer. It feels like it could have used some real video featurettes and such. As a fan I understand the creators are busy getting shows ready each week and all, but they could do more featurettes like that one that showed how the process goes, or at least just recycled that damn thing on each season.

“South Park” – in its Twenty-First Season – still proves to be relevant to current events and as ‘over-the-top’ with its unapologetic humor as it has over the course of the past previous two decades. It continues to make me laugh hysterically and also encourages me to think about the metaphors Trey & Matt put in the jokes.

If you’re a fan of the show you cannot go wrong picking up this season. They’ve just sadly continued to not give us digital copies of the seasons and little bonus materials in general. Still, those audio mini-commentaries on each episode by creators Trey Parker and Matt Stone are always worth giving a listen to – at least once.