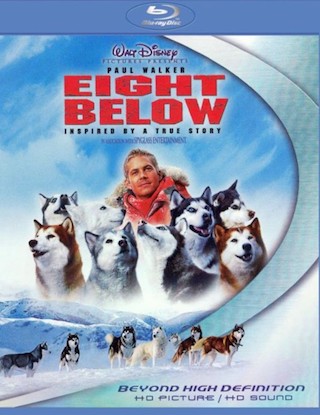 “Eight Below” tells the story of an Antarctic expedition headed by Doctor Davis McClaren (Bruce Greenwood), dog trainer Jerry Shepherd (Paul Walker) and his team consisting of a few interesting stars in Jason Biggs and Moon Bloodgood (best known for Monk). Near the end of this expedition, we learn that an impending storm is coming right for our characters. Jerry Shepherd leaves his dogs behind hoping that the mission might continue soon. Unfortunately, as mentioned above, a huge storm is coming and the dogs must fend off every type of obstacle. Determined to get his dogs back, Jerry does everything in his power to convince sponsors to resume this expedition so he can rescue his dogs. While this sounds like a typical ‘AWWWW’ type Disney film, I was extremely surprised at how, gasp, good this film was. I expected a sappy, boring Disney film. What I got, instead, was a solid film.

The obvious stars of the film are the cute husky dogs and their adventures throughout the Antarctic. Director Frank Marshall (producer for many upcoming films including Jurassic Park film) brought his interesting sense of direction to the table. Instead of presenting sequences where the dogs whine, we are given many sequences that tug at the heart-strings (not in a sappy manner but in a real, emotional manner). Add in the fact that the film was actually shot in the Arctic and not on some Hollywood back lot, the sense of danger and horror these dogs go through, becomes that much more realistic.

As for the film’s actual actors, Paul Walker does he standard fare creating needed emotion and desire for this mission in a convincing manner. Supported stars in Bruce Greengood and Jason Biggs, seem to kind of be present to give us that ‘OH NO’ type scene never really conveying their true emotion. I suppose Frank Marshall didn’t want to give these characters too much material to deal with as many audiences, including myself, simply wanted to get back to the true stars of the film in the dogs.

Eight Below is FAR from Disney’s best effort, but considering Disney’s recent lack of quality in their live-action films, I was highly impressed with this film. The sequences with the human actors work to a certain degree, but are easily forgotten after the film has concluded. What sticks with you, probably on purpose for repeated viewings, are the sequences with the dogs. And these are the type of sequences that make the film as good as it will ever be.

Presented in a 1080p 2:40:1 Widescreen Aspect Ratio, Eight Below looks simply great with very few overall negatives. With this being the third of the main Disney titles, I expected this title to look the best simply because it was the newest and was the type of film you would expect to look nice due to the locales and themes.

The film’s print is nearly pristine suffering from little to no grain or any pixilation or over compression. The film’s outdoor scenes really showcase how bright and stunning hi-def video can look. Colors, especially whites, are put to excellent use giving the film’s outdoor scale an almost real-life experience (it looked like something I’d see on the Discovery Channel). Having only seen a handful of Blu-Ray titles, Eight Below certainly does look good when it has the opportunity to.

Speaking of opportunity, a big chance for improvement (giving Disney’s double-dipping record) if Disney chooses to re-release this title, would be the lack of complete consistency in this transfer. Some scenes look amazing and are truly something one would expect on hi-def. Then we get scenes that look too soft. There are also a few scenes were some of the colors seemed to be washed out. Granted this isn’t the biggest issue, but it stopped Eight Below from being one of the best.

Presented in Uncompressed PCM 5.1 Audio (48 khz/ 16-bit), Eight Below sounds just as I expected it might.

I particularly enjoyed how well the film’s surrounds and sound fields were presented here when necessary. Granted the first portion of the film’s surrounds were rather quiet making one wonder if their speakers were working, but when the action and upbeat scenes arrived, so did the lively audio.

Little things like the dog’s whining and howling are delivered via the rears presented a type of ‘AWWWW’ emotion in our head. We want these dogs to survive and live another day. Dialogue is clear and responsive even in some of the louder windy outdoor sequences, which came as a surprise to myself.

No, Eight Below isn’t a loud soundtrack, which was probably done on purpose by Disney (we don’t want the kids getting scared now). A solid presentation by Disney here with numerous scenes, mostly the wintery sequences, delivering a real performance.

Given Disney’s previous track record with film’s like these, I was surprised that I enjoyed Eight Below on the level I did. With good but inconsistent video and fine audio, this makes for a fine rental. I would recommend it for a purchase, but the lack of extra’s and the pretty high price of $29.99 in most stores is a bit too steep for a purchase.

Buy this Blu-ray at Amazon