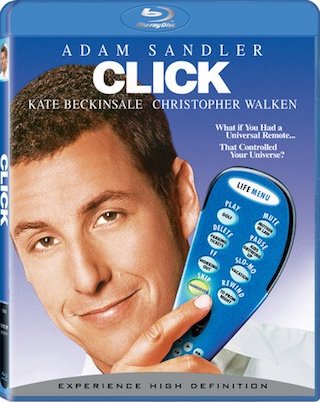 Click tells the story of Michael Newman (Punch Drunk Love’s Adam Sandler), a middle-aged architect who seems to have the definition of a perfect life. Pretty good job, two kids, and a smokin’ hot wife named Donna (Underworld Evolution’s Kate Beckinsale). The only problem for Michael, and for his family, is that his work always seems to come before everything. Whether Michael is staying late at work, taking back his promises to his children, or constantly on his cell phone, he never has the time for the true number one in his life, his family. But all that changes when Michael stumbles into Morty (Wedding Crashers’s always charming Christopher Walken) in a Bed Bath and Beyond store while looking for a Universal Remote Control.

Morty decides, for free I might add, to give Michael exactly what he has come for, a Universal Remote Control. Michael, thinking he has finally gotten his remote control for his television, goes back home and then notices he has the ability to pause time when he pauses his wife during an argument. Now, this is the part of the film where it could get really stupid, somewhat stupid, or smart. Well, the answer is obviously not smart, not really stupid, not somewhat stupid, but probably just above somewhat stupid. Michael, like many of us would, does incredibly selfish things with this remote like have a baseball hit the next door neighbor after insulting his son, skip past arguments, and pass all illnesses in his life. What Michael doesn’t know, and soon horribly learns after warning from Morty, is that the remote, like life, has consequences.

The second half of the film, I’ve read, has disappointed numerous Sandler fans as the film goes from funny to serious, something they apparently don’t like in Sandler films. Well, coming from a person who finds Sandler’s best films to be his most obscure and least popular, the ending is extremely realistic and is something that would happen if we were given a similar remote. Yes, some of the things Michael does in the film are so mean and selfish (they remind me of how completely rude and childish the family members are in Meet the Parents). However, these acts don’t really dampen and hurt the film in a huge way.

If the few emotional, serious scenes during the latter half of Click are a sign of the type of dramatic actor Sandler wants to become, I look forward to more comedy type drama films from Sandler in the future. If you’re the type of person that is open to change in film from characters, Click may be your type of film. . Sure the film sounds like material out of It’s a Wonderful Life, but those few dramatic scenes reminded me of the quality of actor Sandler truly is capable of.

Boasting the first ever BD-50 (dual layer 50GB) disc, Click had quite a lot riding on its’ soldiers. Would this new BD-50, boasting 66% more data room than the competing HD-DVD, disc that Sony has been hyping over so much really be the key to solidity and true hi-definition?

Presented in a 1080p MPEG-2 encoded 1:85:1 Widescreen Aspect Ratio, Click looks probably just as good as I expected a brand new film to look. Add in the benefit of being shot using high-definition video and you get quite the fine release. First up, colors were vivid, boasting, bright and sharp. Considering the first portion of the film is full of these types of sequences, the film’s colors are really given a lot of room to breath. Blacks are solid and tough, while the bright skies are a nice full white (and I might add none of these sequences were over shown creating no such idea that the image was touched up).

Comparing this to the SD-DVD release my friend picked up (he can’t decide on a format), I especially how the level of detail on the Blu-Ray release was so much higher. One of my favorite scenes was the sequence, in the future, where Michael is sitting on his bed while his son speaks to him. The sets here, again probably because the film was shot entirely using HD video, were amazingly real and had a great level of detail via the bright whites and lovely dark colors.

Click was certainly an odd choice for the format’s first dual layer 50GB disc as the film isn’t overly long and the extra room was not really needed. However, I suppose that Sony decided to use the BD-50 disc for this film as the impressive video quality needed all the available space. I look forward to the next coming BD-50 titles. If Click is a sign of what the extra space is capable of, Blu-Ray owners are in for a few great coming months.

Presented in the standard English PCM 5.1 Surround audio track, Click for the first half of the film, doesn’t really sound that amazing. However, after Michael’s life starts to change, the film’s score by Rupert Gregson-Williams really helps to give a nice definition and quality sound to this track.

Like I mentioned, the first half of the film doesn’t really boast anything worthy really noting. We get a lot of dialogue and laughs from the film as it plays to a family setting with scenes of families together playing and laughing. However, with all this dialogue, I was very surprised at how well dynamic range was handled here. Of due notice was the world Michael entered while Morty was showing him the ‘main menu’ of the remote. Little sound effects of blips and bloops sounded great.

The film’s second half is where the sudden change occurs, not only in the film itself, but in the film’s overall soundtrack. Due to the film taking a much darker tone, the haunting score by Williams helps bring the changes to Michael’s character to our speakers and our ears in an extremely impressive manner. Sound effects and placement is excellent and meaningful. In some sequences, due to the somber score, the heart feels a tug or two.

While the audio quality isn’t the loud, robust action type experience, the second half of the film’s audio experience really holds up to some of the better audio tracks available thus far on the Blu-Ray format. If it hadn’t been for this raise in the quality here, I wouldn’t have been that impressed. However, with that said, Click contained a fine audio selection.

The most impressive part here is that all of the extra’s provided below were filmed in complete high-definition adding a higher sense of quality here.

While I expected Click to be the standard dull Sandler comedy, I was quite surprised that I enjoyed the film. Boasting great video and audio, the features presented in high-definition was quite the nice addition. Granted it would have been nice to see some exclusive features, but it’s still noteworthy. As this is the first BD-50 disc, I recommend this title to Sandler fans (go in with an open mind) and a very strong rental for everyone else.