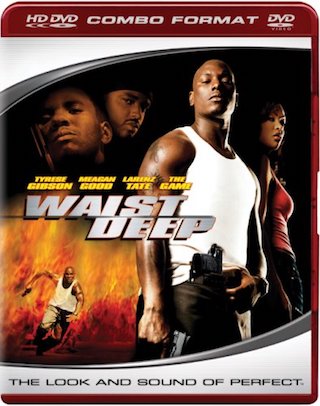 “Waist Deep” tells the story of a man named Otis Senior (Baby Boy’s Tyrese Gibson), an ex-con who is trying to straighten out his life after being releasing from jail. Otis Senior, or his previous street name of ‘O2’, is working as a security guard at a place he got from part of his ex-con program. One day O2 goes to pick up his son, Otis Junior, from school when his child and his car get taken from him. O2, probably due to his dangerous past as a street hustler, chases down these men and, despite killing two of them, doesn’t get his car back. He then realizes, after seeing a woman named Coco (Meagan Good) who tried to sell him some suits cheap, that he was set up. Obviously this doesn’t sit well with O2 who forcefully (read gun point) convinces her to come with him in hopes of getting his son back and getting her off of the hustling that has consumed her life.

O2’s cousin Lucky tells him (Lucky was suppose to pick up Otis Junior but failed to), that a gang leader named Big Meat (rapper The Game) heard that O2 has a lot of money (try $100,000). In your typical movie plot line, Big Meat gives O2 48 hours to give up this money in exchange for his son. While all this seems kind of terrifying, there is some actual humor to this. As all of this is occurring to O2 and Coco, in the background there is an anti-violence rally going on throughout downtown Los Angeles.

I’m not quite sure if director Vondie Curtis-Hall intended this movie to poke at the manners in which society operates, but it surely seemed this way to me. From the high-energy opening where Otis Junior is kidnapped, to numerous other scenes, all the citizens of Los Angeles seem to do is go about their business. Take another sequence where O2 and Coco get some money from a bank. As this is occurring, ‘Save Our Streets’ is being chanted by tons of people outside. Just to prove my point, take the following sequence where an elected official is outside speaking about ‘terror on our streets’ as a couple of guys are jacking someone at gun point. All this is taking place is the SAME frame!

Waist Deep succeeds on a certain level in that the film has a fairly solid cast in the always convincing Tyrese Gibson (certainly not his best work, but not that bad), the ultra-sexy Meaghan Good (she tends to steal a few scenes), and even rapper The Game, despite playing the typical tough-guy, does a half-way decent job. It just is so unfortunate that our society plays out in this typical manner that is portrayed in the film. As Coco tells O2, ‘just guys killin’ guys’.

“Waist Deep” arrives courtesy of Universal in a 1080p 2:35:1 Widescreen Aspect Ratio. Due to the nature and subject of the film, this hi-definition transfer captures all the raw, gritty themes presented in the film.

With this film being extremely new, the print has maintained its full integrity and shine. Colors are spot on especially in some of the opening sequences. I found the opening scene where O2 and Otis Junior are cruisin’ in the car to be quite the nice visual spot. Colors showcased the damp, hot, steamy L.A. air that, naturally, was shown on O2 and Otis Junior in the form of beads of sweat. Sure things like this aren’t necessarily the definition of hi-definition, but more detail is always a better thing as it helps to bring a closer sense of realism.

There were a few very slight examples of edge enhancement and some grain in the closing sequence in Mexico that didn’t really hinder the experience but were still present. Detail was also very fine in this presentation. As I mentioned above about the beads of sweat, little items like the shining grill of Big Meat’s Hummer and the actual tire tread marks in the road from the initial kidnapping sequence, again, gave a higher sense of realism.

No, the transfer for this film isn’t demo-material at all and I don’t ever think Universal intended this to be so. What this transfer is, however, is quite a fine job.

The provided Dolby Digital Plus 5.1 in either English, Francais or Espanol really helps to capture the essence of the rugged L.A. scene.

This hip-hop heavy film boasts a, well, heavy soundtrack featuring a lot of the top hip-hop artists blarring about this and that. But that isn’t necessarily important. What is important is that all this hip-hop music that’s blarring gives your sub a nice workout. Dialogue is clear enough while dynamic range, particularly the surrounds, are worked nicely especially in the opening sequence where bullets fly, cars squeal and O2 screams (this was quite the shock for me as I had my audio up a bit too loud and my brother wondered if someone was screaming outside). After this sequence, the audio track tended to become quite absent.

While the sub and surrounds get a nice work out, I wanted a better overall experience from the film. Take the film’s score by Terrance Blanchard, which was never really heard until the film’s final 20 minutes during the car sequence. Why have a score if you’re going to have all the ‘written for the soundtrack’ music in the film instead? I suppose this is to appeal to the demographic of the film. Anyhow, this was the audio did a fine enough job for the film at hand, just a bit more would have been nicer. Perhaps more use of the fronts and less of the rears? It just seemed like the film focused a lot of the background noises, which was nice, but made us forget about the actual happenings in front of us.

A big annoyance here is that all of the Special Features are on the DVD side of this combo.

While the film at hand is worth a watch through, I was disappointed by the lack of real features here. The video and audio do their jobs, but the features really do hurt this overall package moving this from a recommended purchase to a rental.