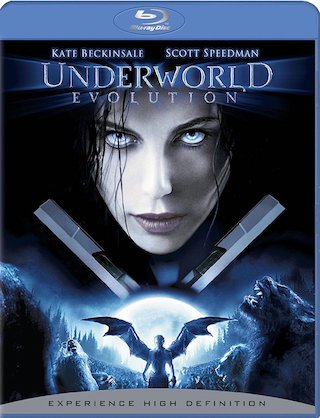 You won’t ever know the excitement I felt when I heard a sequel was being made to the film Underworld. While I didn’t see the big to due about the first film, I was actually hoping that the film would take the route some sequels have taken by making the film far superior to its predecessor. I guess Director Len Wiseman was trying to go out and make the sequel to Underworld even worse than its predecessor as he has completely succeeded in doing so.

As Underworld Evolution opens up, we get a small prologue that flashes us back to 1202 AD. The prologue tells us of the war between the vampires and the Lycans. We learn how the war began with two brothers, both the immortal sons of Alexander Corvinus. The first brother, Markus, was bitten by a bat and hence became the blood leader of the vampies. The second brother, Willian, was bitten by a wolf and hence became the first and most powerful Lycan. Sounds like a nice family feud huh? After this prologue, we pick up right where Underworld left off as Selene (Kate Beckinsale) and her super boyfriend have finally extinguished any and all foes and finally seem like they may have some time for themselves. Oh lord, there is another foe to fight? Turns out that Markus has been woken up by some force or person and isn’t all too excited to see that his family is completely dead.

So the big question at hand must be is Underworld Evolution a better film than its predecessor? Well, similar to the first film, I tried to sit down and, after reading the horror that was this film approval rating over at critic heaven Rotten Tomatoes, find something possibly charming or pleasing about this sequel. Sure the visual effects and set designs look a heck of a lot better than the first, but that still doesn’t protect the film and turn it into something that is good. As I watched Evolution for the second time due to the included commentary track, I found myself disliking the film even more, a similar feeling I had after my second viewing of Underworld. Yes, Kate Beckinsale does look good in her skin tight outfit, but the story she is surrounded in feels like it has been diluted of anything possibly entertaining or possibly good.

It is pretty obvious that Director Len Wiseman likes blood, a lot. Take the opening sequence about 3-4 minutes in where blood splatters in every little direction. A ton of blood, Mr. Wiseman, doesn’t help the audience if the blood used in the extraneous story is never made truly clear as to why it is being used at such a high level. And a lot of guns, guns, and, one second, ok, more guns are used. Granted some of the action scenery was pretty cool, especially the scene around 44-46 minute mark, but a majority of the rest seemed oddly thrown in to make the film longer.

While Director Wiseman does try to throw in some emotion and a possible love story, which I applaud him for as it seemed to be working for a bit, the overall ending effect after the film has concluded is the feeling of a dry mouth from nearly falling asleep due to the soap opera I was apparently watched called Underworld Evolution. Maybe I’m being too critically here, but a successful action drama involving vampires and their habits has already been made and it is called Buffy: The Vampire Slayer. As a sequel, Underworld Evolution tried to put aside the huge negatives that many critics had with the film, but instead has come up with all new negatives that create an even more sour taste in the viewer’s mouth.

Considering the film Underworld Evolution was just released a few weeks ago, I was surprised that Sony would decide to re-release this title on Blu-Ray so quickly. The DVD release boasted fine picture so what else could the Blu-Ray version do? Well, the image quality has been taken to another level here. The only real problem with the DVD release I had was that some of the darker spots in the film looked almost too dark. This caused, as the film progressed, the lighting to fluctuate making me wondering if my TV was dying. The Blu-Ray release fixes this minor problem as a majority of the darker scenes actually look in place and seem right. The color palette, consisting of dark darks, was spot on and really helped to define this horrid, albeit beautiful film image-wise. The original 2:40:1 aspect ratio is maintained here as the print showed little to no damage. Edge Enhancement was spotless as I didn’t notice any real problems overall. I might also add that Blu-Ray really improves Kate Beckinsale’s look quite a lot. Nice shiny leather made the film still really bad, but somewhat watchable, the second time around. The image quality was improved quite a bit, giving the perfect image quality for the not-so perfect film.

Sony has given us Underworld Evolution in a fabulous way. The new PCM 5.1 audio tracks breaths new life to this film. My main complaint with the DVD release was that some of the action scenes were so loud that it seemed that the audio track was, literally, too loud. Sony didn’t necessarily fix this problem, but it seemed like this problem wasn’t as noticeable the second time through. The issue that both versions of the film had with the sub moving extremely quickly causing an almost sub over-response (in that the sub seemed like it was one step ahead of the action), was still present here. The biggest improvement that the new PCM 5.1 provides is the overall dynamic range. Bullets sounded, literally, like big explosions as they zoomed past me causing euphoria of fun in my ears. A demo-worthy scene is the fight that takes place around the 35-40 minute mark on the back of the truck. I ran outside for a minute, with the volume up a bit, and closed my eyes. I could have sworn something was happening right behind me. Talk about an imaginary and powerful audio track. Blu-Ray has been questioned by a lot of people. Is it worth the $1000+ dollar price tag. Well, if films like Underworld Evolution are any type of sign as to how action films will sound, Blu-Ray has me more than convinced.

Even a ton of extra features can turn a terrible film into a good film.

Considering my immense hatred for this film, I will admit that the Blu-Ray version, even though I still disliked the film the same the second time through, had me dazzled and in awe in relevance to the audio track. Despite the features remaining the same, which is a disappointment, I will recommend this release for fans as a purchase and those curious in the new format as a strong rental.

Buy this Blu-ray Disc on Amazon