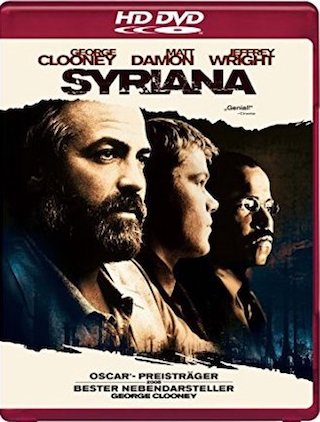 The world of politically charged films has certainly grown in the past few years. Films like Farhenheit 911 have seen big success, while other films like Rupert Murdoch’s OutFoxed have seen more of a critical success. Both of these films had extreme media attention, one obviously more than the other, prior and after their releases. Both asked questions and demanded answers to topics and issues we, as people, wondered about but never really asked about as a simple person can’t really enact a high success rate in terms of results. However, if you have a name like Michael Moore or Rupert Murdoch attached to the bill, people will probably pay attention. A similar note is given to the recent political thriller Syriana starring George Clooney. Even though Syriana had actors like Matt Damon and George Clooney attached to the bill, would this be enough to make the film’s questions seem important enough to make an impact?

Syriana, to sum up the film in three words, is about oil and money. The film begins with one of the Gulf States agreeing to supply the up and coming China with some of its oil. Texas based company Connex, views this deal as a huge defeat. At the exact same time as this deal is happening with Connex, another company, Killen, has signed a deal to drill for oil in Kazakhstan. Connex, obviously, announces an immediate merger with Killen, thus giving them the oil. Wait one second. This sounds pretty familiar doesn’t it? Naturally the Justice Department intervenes and the movie starts to accelerate.

One of the strongest points about Syriana are the simple characters and issues that the film presents. We meet many a character, so many that if I were to list every major character, this review would be quite long. But to list a few of the major characters, the character of Robert Barnes (George Clooney), a veteran CIA field agent, is excellent and simple. The character of Bryan Woodman (Matt Damon, a trader based in Geneva, is one of the more intriguing characters. Woodman is invited to a party at a gorgeous Spanish villa owned by Nasir and Meshal, the sons of a Gulf oil Sheik. The Shiek decides to give Woodman a $100 Million Dollar Contract results in a few scenes of absolutely stunning acting and impressive dialogue between the two.

Reading a few reviews of this film, I was surprised to find that many found the film to be overly complicated. I will agree that the film is not the easiest film to follow, but the basic plot is something that is, even though we don’t fully know, probably going on right in front of our eyes. Syriana is not necessarily a film that asks to be understood from minute one to minute 126, but Syriana is more of a film that asks us to follow the basic plot of the film and wonder what is going on. The real goal of director Stephen Gaghan (writer of Traffic and director of Rules of Engagement) is to explain the basic plots of the oil business. The film ends and Gaghan wants us to start looking into this demanding that we get an explanation (especially now with the recent higher gasoline prices).

Syriana uses characters played by actors a majority of us are familiar with for a purpose. If any of us have followed the news, it’s clearly known that Clooney and Damon are politically charged actors, both who make films that try to have that political message (Clooney more so than Damon especially with Good Night and Good Luck). As a whole though, Syriana is a highly fascinating film with many little stories that seem, if we connect all the dots, to come together, eventually, to make a whole story. While the film wants to try to take simple sides to this oil issue, it would rather look at both sides of the story and ask us to pick the side. Syriana, as it has been said before, is a fascinating film that I’m sure anyone can enjoy if they let their own mind open up to the ideas presented.

The DVD side of Syriana had consistent issues with grain. The HD-DVD release didn’t necessarily fix this problem, but the grain seems like it belongs. By this I mean that since we’re able to view this film in 1080p, the grain felt like it helped bring out the themes of the film. Themes of darkness, terror, etc. Colors were brighter than ever resulting in a stronger appearance by a majority of our major characters. Sharpness was also a bit better giving the film’s character a more noticeable and realistic feel. Even though Warner didn’t totally fix the aforementioned grain issues, I will give them a round of applause for making Syriana look more realistic (probably right in line with the film’s theme) than ever before.

Appearing on HD-DVD, Syriana benefits from the Dolby Digital Plus 5.1 Audio Track. The only real problem I had with the DVD release was that some of the effects sounded muffled. The HD-DVD release clears up this problem in a certain degree, but the film’s surrounds, like footsteps and explosions, didn’t sound as good as they could have been. The film’s subject matter causes the film’s soundtrack to constantly rise up and down giving the viewer a rather large headache as they try to adjust and find the perfect level. While the DD+5.1 was definitely a better choice for the film, I still found myself having the same problem with the audio.