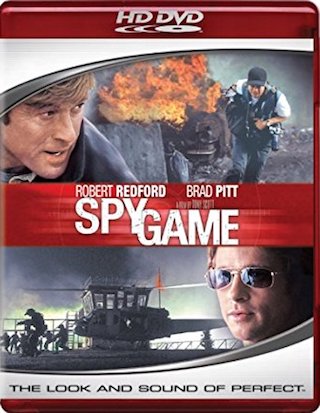 Director Tony Scott’s thriller Spy Game finds once director and actor Robert Redford and Brad Pitt (they made A River Runs Through It as director and actor) teaming up. Robert Redford plays Nathan Muir, a man who is a on the brink of retirement from the CIA. As he is cleaning out his office, Muir is told that Brad Pitt’s character, Tom Bishop, has broken into a Chinese prison simply to rescue the woman he loves. Doesn’t seem to bad does it? It turns out that the CIA thinks that the Chinese is going to try to extract as much information from Bishop as possible (read information as secrets). Muir has scramble and see if he can get Bishop out in less than 24 hours before Bishop is scheduled for execution.

Tony Scott, the skillful director of Crimson Tide and Enemy at the State, is just as skillful here as he has been before. While the ideas presented in Spy Game is nothing totally brand new, Scott adds another level of credibility to the film with his interesting twist of direction. Since the film came out in 2001, a year that saw such horrendous disasters as Pearl Harbor (well the PG-13 cut at least), Scott’s stylistic thriller was a welcome film during the November frame. Actors Redford, who always seem to be on his ‘A’ game no matter what film he stars in, and the overly-publicized Brad Pitt (he’s a great actor despite the hatred some have for him) delivers a fine performance.

No Spy Game is not the best example of a Tony Scott film nor the best example of an excellent thriller, but the film still manages to provide a solid two hours of excitement and fun. While I probably won’t remember the film in a few months, I will return to see it again and again as the film is a fine thriller and is interesting enough for fans of either the director or the stars.

Spy Game has been given an incredibly terrific 1080p 2:35:1 Widescreen Transfer. The image quality is up there titles like WB’s Training Day and Universal’s Ray. Colors are spot on giving the characters a more realistic feel. Since this is a fairly recent film coming out in 2001, the print the film has is pristine making it hard for one to find many faults in this transfer. Grain is not noticeable at all while little things like windows and trees are view to be seen giving this HD-DVD transfer its’ more than deserved ‘the look and sound of perfect’ tagline. Edge enhancement, sometimes a problem in film’s of this nature, was nowhere to be found here. More and more as each title arrives in stores, I’m finding myself happier and happier with the result of HD-DVD. Bring on more!

With the recent 2.0 firmware upgrade from Toshiba, I’m was hoping that a film like Spy Game, due to its’ theme and nature, would have boasted a Dolby TrueHD audio track. Alas, a Dolby TrueHD was not found here but a rather impressive Dolby Digital-Plus 5.1 track was found here. Surrounds are great giving the necessary low bass in some of the quieter scenes while the audio revs up in some of the louder scenes. Dialogue is easy to understand and never was overwhelmed by some of the rear and frontal effects, something I feared might happen as have in recent films. While the audio track was not as impressive as I hoped (as I mentioned a Dolby TrueHD would have been great), the audio track was more than fine for the subject at hand.

So the question at hand is whether or not this release of Spy Game is worth your time and your money. Well, the answer is simple. If you enjoyed the film, the HD-DVD release boasts improved video and audio, but no new features. If you’re more of a V/A guy, I recommend this for an upgrade. However, if you’re more into the feature aspect of the film, give this one a rental just to the see the improved V/A.