Posted on May 18, 2018 by Brendan Surpless Leave a comment 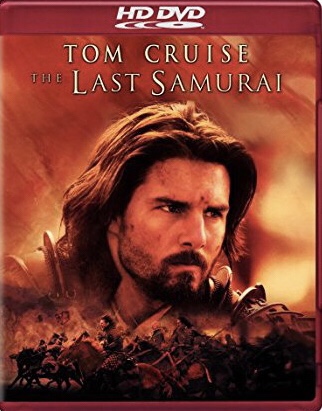 With HD-DVD gaining a lot of press and discussion over the past few months, many wondered what would be the initial title for release that would help showcase the power that Toshiba wanted to showcase. Some figured a big blockbuster like The Star Wars Trilogy could be released (wouldn’t that be nice?) But with Fox being exclusive to Blu-Ray, HD-DVD’s main competition, no one could figure that a moderately successful film like 2003’s The Last Samurai would ever be thought of as a player seller. Well, after jumping through the disc, one can easily understand why Warner Brother’s decided to chose this title for the main release.

The Last Samurai stars Tom Cruise as Captain Nathan Algren, who is a decorated Civil War hero. Algren, as of late, has fallen into a world of drunkenness and performing in side shows selling rifles. He wants a sort of redemption from the world he lives in now so he can eventually return to his famed world of before. It turns out that the Japanese government is looking for a military leader to train their new Imperial Army. Japan, who was trying to move into the world of modernization, needed an army to fight against the rising world of the samurai who wanted to preserve the countries sense of the old. Algren accepts the job for the main reason of the nice pay.

Algren’s main foe in the film is Katsumoto played Academy Award Nominee Ken Watanobe. For Algren, Katsumoto seems like another ordinary tribal leader who stands in the way of Algren accomplishing his goal. But Algren soon learns that Katsumoto is a foe to be feared when he encounters him and is the subsequent scene sees Algren being captured by this man. We learn that Katsumoto respects Algren for his immediate courage thus resulting in Algren being kept alive. Algren resides with the samurai learning everything about them including their customs, languages and codes of honor. When occurs is that Algren soon becomes attached to the samurai and their ideas (their main idea is that they are serving the young and impressionable Emperor by rising up against anyone who decides to be against him.)

This previous sequences of events is where the film really takes a stride into the excellence category. Katsumoto plays the teacher for Algren all while Algren plays the reluctant student who doesn’t want to learn, but soon is immersed in the world around him by simply learning about it. Katsumoto has pledged his life to the defending the dying code of the samurai. Algren soon bonds with Katsumoto learning the ways of this man who he once saw nothing in.

The cast is top notch in this film. Watanobe, who was nominated for Best Supporting Actor but eventually lost, is excellent in the shoes of Katsumoto. He plays the role with conviction, skill and honor, similar to how he would have acted had the film took place in that time period. Tom Cruise, despite many saying he didn’t really fit the role, was very convincing in this role. For some reason, many people like to jump on the bash Tom Cruise bandwagon whenever he makes a film due to his overexposure as a celebrity. Unlike like many in the spotlight, Cruise does deserve the popularity he has received, as he always tends to deliver in his roles. He can make characters, who may not necessarily seem interesting, into characters with multiple layers that result in many days worth of discussion. As for the director, Edward Zwick has made a few other war related films like 1989’s Glory which also deals with the theme of men whose personal loyalties have figured to be more important than their political views.

Having never seen The Last Samurai before this HD-DVD experience despite owning the original DVD release, I was very excited for the film as everyone I’ve spoken to has said the film, if you liked Zwick’s other films, is similar in line. The end result was the acclaim and fame the film has received is extremely deserved. The Last Samurai presents a standard theme that is made that so much more interesting simply due to the cast and the direction. For those of you who like Cruise as an actor (admit it!), are anxious to see what Watanobe is all about, and enjoy period film’s like this, The Last Samurai is right down your alley. The film is extremely impressive visually and in the audio department making this is a sole reason to purchase an HD-DVD player.

So the day has arrived. The Last Samurai for Toshiba and for Warner Brothers seems to be the defining title as it can be seen on any demo player at Best Buy’s across the country. So is the transfer that noteworthy? The answer is a resounding yes. According to the back of the package, we are treated to the similar 2:35:1 Widescreen Aspect Ratio. Like the previous release, colors are deep, especially blacks while the overall color palette is very filling almost seeming like many of the film’s scenery are out of a classic painting. A very visually pleasing transfer appeared on the original DVD release. For the HD-DVD release, the whole picture has really been improved. Everything is noticeably clear, from the hairs on Algren’s face to the grass sailing in the wind. It is quite understandable why so much attention has been attracted to HD-DVD. If The Last Samurai is a sign of things to come image quality wise in HD-DVD, throw your old DVD players out the window and welcome to the world of 1080p.

The available Audio tracks for The Last Samurai are the standard Dolby Digital 5.1, but for the HD-DVD release, the audio track has been renamed to Dolby Digital Plus 5.1. According to a release from Dolby headquarters’, this audio track provides UP TO and including 7.1 discrete channels of audio and entertainment. The audio track I chose, mainly because I don’t have a 7.1 capable receiver, was the standard Dolby Digital Plus 5.1 which sounded just fine despite a few of the vocal scenes being a little bit difficult to understand. Otherwise from that little mishap, everything else, from the deep clear bass to the overall well used dynamics are gorgeous. Comparing this to the regular release on DVD, the only real noticeable difference would be that everything sounds a bit clearer. However the little difference won’t really be noticed unless you have a good ear.

History vs. Hollywood: The Last Samurai: In this 23 minute documentary, we get a lot of interviews with the cast. They mostly discuss the codes of the samurai’s, the weapons, the acting and how they tried to maintain everything to the smallest detail.

Edward Zwick: Director Video Journal: In this feature, we see a lot of video footage from the set, all of which Zwick narrates. He mostly speaks to us about the various set locations, the issues he dealt with, and the costumes he chose, all of which were authentic to the Japanese history of Samurai’s.

Tom Cruise: A Warrior’s Journey: Here we get a lot of behind the scenes info including set visits. Cruise also speaks on his training to get into shape and the mindset to play Captain Algren.

Making an Epic: A Conversation with Edward Zwick: Director Zwick sits down and speaks to us on the subject of why he felt compelled to make this film.

A World of Detail: Production Design with Lilly Kilvert: Here we get a brief look the film’s various production designs and sets.

Silk and Armor: Costume Design with Ngila Dickson: Another brief feature here this time dealing with the various costumes in the film including their concepts and the final design of them.

Imperial Army Basic Training: From Soldier to Samurai: The Weapons: Here we get a look into the film’s many extras that were used for the various battles. We learn how they were all trained and drilled into the combat maneuvers.

Deleted Scenes: Here we get two brief deleted scenes. First up is the scene The Beheading which deals with a conflict between a samurai named Ujio. This marks Algren’s first encounter with the warrior elitle. The second scene entitled Algren and Katsumoto gives us a discussion between the pair about killing, honor and the subject of modernization and what it will do.

The Last Samurai is simply well-done with fine acting, excellent scenery and visually amazing battle-sequences. While the DVD release was amazing, the HD-DVD, despite having the same features, is that much better simply because (surprise, surprise) the visual themes of the film are taken to a new level through the shear intense quality that HD-DVD brings. The Last Samurai is a highly recommended film for any person especially if you are thinking of purchasing an HD-DVD player.

This site uses Akismet to reduce spam. Learn how your comment data is processed.