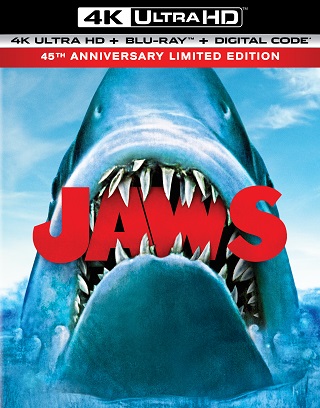 The classic 1975 film “Jaws“ directed by Steven Spielberg is officially coming to 4K UHD Blu-ray on June 2nd, according to a full press release just issued by Universal Studios Home Entertainment. The film, a winner of a total of three Academy Awards (“Oscars”), starred Roy Scheider, Robert Shaw, Richard Dreyfuss, Lorraine Gary, and Murray Hamilton. The new 45th Anniversary Limited Edition of the film on 4K will be available in various forms including a collectible lenticular packaging with a 44-page booklet (pictured below in high resolution).

First, the tech specs for the 4K UHD Blu-ray include a 2160p video presentation in the 2.35:1 aspect ratio with Dolby Vision, HDR10, and HDR10+ forms of High Dynamic Range along with Dolby Atmos sound. The release will come in the form of a “combo pack” meaning that it will also include the Blu-ray Disc and a digital code (copy) of the film. You can find the Exclusive 4K UHD Blu-ray SteelBook of the release available for preorder over at retailer Best Buy (pictured below).

The bonus materials set to be included on the release span across both the 4K and the Blu-ray Disc and are detailed below.

UPDATE #1 (10:10 am EST): You can now find the 4K UHD Blu-ray release available for preorder over at online retailers Deep Discount and HD Movie Source. There’s still no preorder listings available yet for Amazon or any of the major retailers. Stay tuned for updates.

UPDATE #2 (4:01 pm EST): You can now find the 4K UHD Blu-ray is available for preorder over at Amazon and at retailer Best Buy.

Further below, after the break, you can find the full press release for this upcoming 4K release of the film with all of the details.