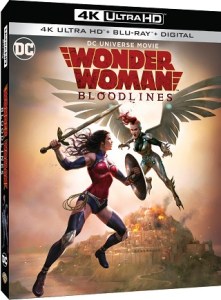 The 2019 DC Universe Movie “Wonder Woman: Bloodlines” is coming to both 4K UHD Blu-ray and Blu-ray Disc on October 22nd via Warner. The film, directed by Justin Copeland and Sam Liu, features the voice talents of Rosario Dawson (as “Wonder Woman”), Marie Avgeropoulos, Jeffrey Donovan, Adrienne C. Moore, Kimberly Brooks, Courtenay Taylor, Constance Zimmer, and Michael Dorn. Tech specs for the 4K and Blu-ray releases have not yet been fully detailed. You can, however, visually expect the 4K to come with HDR10 form of HDR (high dynamic range) and 1080p HD video on Blu-ray. Both should be in the 1.78:1 aspect ratio and receive lossless surround sound mixes. Stay tuned for an update on the exact tech specs for the releases. One can now find the 4K UHD Blu-ray and Blu-ray are now available for pre-order over at Amazon. It’s certainly worth noting that you can watch the trailer for the film HERE (on YouTube). Bonus materials set to be included on the releases are listed below.

Further below, after the break, you can find the full announcement regarding these upcoming releases.