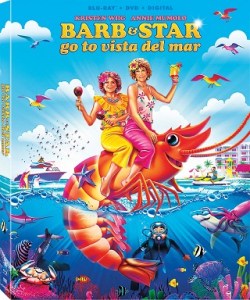 The 2021 film “Barb & Star Go to Vista Del Mar” is officially coming to Blu-ray Disc on April 6th via Lionsgate. The film, directed by Josh Greenbaum, stars Kristen Wiig, Annie Mumolo, Jamie Dornan, Wendi McLendon-Covey, Phyllis Smith, Ian Gomez, Damon Wayans Jr., and Vanessa Bayer. It’s certainly worth noting, that at the time of writing this, the film is “Certified Fresh” over at Rotten Tomatoes. The tech specs for the Blu-ray release include a 1080p HD video presentation in the original 2.39:1 aspect ratio and DTS-HD Master Audio 5.1 lossless surround sound. The release will come in the form of a “combo pack” meaning that it will come with its DVD counterpart and a digital code (copy) of the film. You can now find the Blu-ray available for preorder over at Amazon. The bonus materials set to be included with this release are listed below.

Further below, after the break, you can find the trailer for the film and an announcement about this film getting a home video release.