1960 Billy Wilder film The Apartment on 4K in March 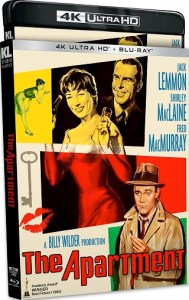 The 1960 Academy Award-winning film “The Apartment“ is officially coming to 4K UHD Blu-ray on March 8th via KL Studio Classics.  The movie won 5 “Oscars” (Academy Awards) including “Best Picture” out of the 10 awards it was nominated for.  Directed and co-written by Billy Wilder, the film starred Jack Lemmon, Shirley MacLaine, Fred MacMurray, Ray Walston, and Edie Adams.

The tech specs for the 4K UHD Blu-ray release include a 2160p Black & White video presentation in the 2.39:1 aspect ratio and lossless 5.1 surround and the original 2.0 Mono sound mixes on a BD-100 disc.  NOTE:  This release appears that it will be presented in SDR (standard dynamic range) and lack HDR (high dynamic range).  The release will come in the form of a “combo pack” with its Blu-ray Disc counterpart featuring the same aspect ratio and audio mixes.

It’s most certainly worth noting that there will also be a Blu-ray “Special Edition” released (by KL Studio Classics) on March 8th as well, which is included in this set.

The full set of bonus materials that will be included with the two discs of the 4K UHD Blu-ray release are listed below.