1963 film The Great Escape comes to 4K in January 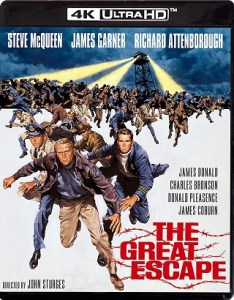 The tech specs for the release include a 2160p video presentation in the 2.35:1 aspect ratio with lossless 5.1 surround sound and 2.0 Mono sound mixes on a BD-100 (100-gigabyte disc). NOTE: This will be presented in SDR (standard dynamic range) and lacks HDR (high dynamic range). A bit of further detail about this presentation can be found in a quote below, taken from the original announcement tweet (by KL Studio Classics) from back in October.

You can now find the 4K UHD Blu-ray available for preorder over at Amazon. This 2-disc set will include a Blu-ray with special features. The bonus materials set to be included on the 2 discs are detailed below.