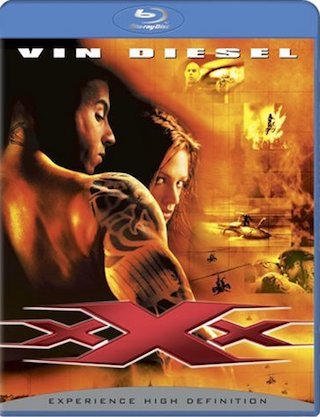 Rob Cohen action-adventure film xXx tells the story of extreme thrill seeker Xander Cage (Vin Diesel), a man who is simply know for the outrageous stunts he pulls off (especially the opening stunt off the bridge). Everything is sailing smoothly for Xander and his buddies until his place is raided by the NSA who, in turn, want to craft this man into the field’s newest secret agent. The man at the head of Xander’s training is Augustus Gibbons (Samuel L. Jackson). Naturally as a thrill seeker, Xander doesn’t like to follow rules and likes to act like a bad-ass 100% of the time.

I remember seeing xXx in theaters when it first came out and I certainly remember being blown away by how entertaining, not necessarily really good, a film this was. Director Rob Cohen, who teamed up with Diesel on The Fast and The Furious, definitely knows how to make a film exciting and dumb (dumb in the sense of a popcorn flick), a typical quality of the summer action flick. The only problem here is that action scene after action scene results in a film that is fun to watch once in a great while, but doesn’t really do much else, which was a true shame since Cohen made Diesel into a household name with their first team up. I figured they knew how to create a film with big explosions and action all while holding a pretty solid story (evidence of The Fast and the Furious

For some reason, I’ve always found Vin Diesel, despite his bad-assness, to handle these types of roles in a fine manner. Diesel proclaimed that Xander would be the new ‘James Bond’ character for the 21st century that everyone would grow to love. Well, last I checked, James Bond is as popular as ever and, if anyone has seen the 2nd film in these series, Hollywood didn’t necessarily agree with Diesel’s comment.

First the one positives; the image itself is better than SD-DVD, in a certain degree. There is more detail, but the amount of problems result in a poor visual experience instead of a visual feast. However (this is where the positives stop), the ridiculous amount of dirt, grain, and messed up colors. Considering this film was only 3 years old when it made its’ Blu-Ray debut, I expected quite a lot and what I got was a bunch of nothing with a side of emptiness.

The film’s colors, from blues, green and blacks, looks completely washed out and disorganized making me wonder if I was watching a Blu-Ray release or something else. Some blame the poor Samsung BDP-1000 player and its’ faulty chip (which Samsung has admitted). However, I feel this excuse shouldn’t be allowed. If you are asking myself and others to spend A. $1000 on the player and B. Upwards of $29.99 per disc, I expect to be blown away, which is the exact opposite (well, I felt like blowing chunks after this presentation).

The provided uncompressed PCM 5.1 surround sound audio, luckily, sounds awesome. I guess Sony figured they would give us a rocking audio track, sometimes so rocking, that we might forget about the horrid video quality. Nope. Anyhow, the audio never stutters or underperforms.

First off, dynamic range is impressive here. Big explosions and rocking performances (Especially Rammstein’s opening clip), really deliver here. Everything is well spread out, from the rears that see attention via zipping bullets, to the fronts that help bring the film’s various sound effects like screeching tires to crushing snow (the avalanche) to our ears. Bass, I might add, is quite deep too. I sometimes felt like, again in the opening concert scene, that I was at a true concert (well, minus all the screams and pushing).

Unfortunately with all these positives, there is a slight negative here that tends to really hurt the audio performance. The film’s dialogue, usually on the lower side, is sometimes so muddled by the accompanying audio and bass, that I found myself constantly adjusting the volume up and down. A true disappointment in an otherwise solid audio experience.