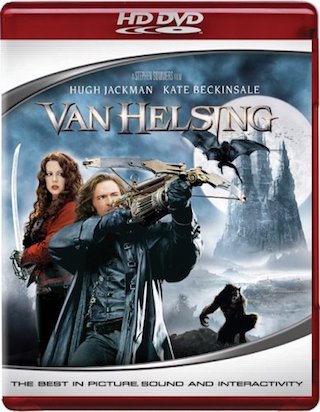 In Stephen Sommers’ Van Helsing, we meet Gabriel Van Helsing (Hugh Jackman) who is a professional monster-killer with a sidekick named Carl. Van Helsing must first track down Mr. Hyde who lives in the Notre Dame Cathedral and, sometimes, likes to venture outside for the occasional murder here and there. After completing this basic mission, Van Helsing is sent to the famous Transylvania to deal with Frankenstein’s Monster where he meets Anna Valerious (Kate Beckinsale). Anna and her brother Velkan represent the last of nine generations of a family whose one goal is to rid the world of Dracula. Naturally, Anna is suspicious of this Van Helsing character but eventually teams up with Helsing to kick some butt.

It amazes me how Sommers convinced Universal to grant him well over $150 million dollars to make this film. I suppose this is because Sommers’ last two adventure based films, both Mummy films, were great summer adventure flicks which both made Universal some nice coin. However, Van Helsing never seemed to click with audiences as it just made over $160 million dollars domestically. Certainly not the huge success Universal or Sommers were hoping for. Some feel the reasoning was the lack of star power, but was Brendan Fraser really that much of a bankable star? Some feel that Van Helsing focused too much on CGI with all the various amounts of monsters that prowled the screen. I tend to lean toward the latter as Van Helsing seemed like 132 minutes of CGI effect after CGI effect.

On a more of a personal note for myself, I wonder when action adventure films will return to the old days where directors didn’t rely on CGI effects as much as directors today do. The opening scenery for the film is quite impressive with the black and white montage, but I could never just get into the film probably due to the amount of improbable situations that were placed in front of me. Characters fall hundreds and hundreds of feet and seemingly walk away with only a slight bruise. Now I know what would a movie be if the characters didn’t defy common sense, but when a film totally defies any type of logic, the film becomes quickly boring because the viewer will know exactly what to expect scene after scene. I know this seems like an overly big complaint, but, while some of the CGI effects were terrible, some weren’t bad.

All the CGI effects were necessarily a bad addition to the film, but in this film’s case some of the effects looked amazing, like the ball scene in Budapest, while some of the gory monsters looked like they were put in the oven for too long. Count Dracula (Richard Roxburgh) also looked great, but the plot of the film seemed a bit odd in my view. The idea of Dracula using Frankenstein’s Monster to help bring his countless offspring to life was definitely an odd twist.

I guess Sommers used this twist to introduce countless amounts of CGI as the CGI effects, on an overall basis, are interesting and extremely violent in some scenes, while being boring and dull in other scenes. The interesting part is when I first saw the film in theaters, I did enjoy the film a lot more than I did on this repeat viewing. I guess the reason was that since the 2004 release, films have come along that have used CGI effects with a higher rate of skill and success (Hellboy is a prime example). If Sommers had just stuck to the interesting and extremely violent part, Van Helsing might have ended up being a film that one could sit through more than once.

While at least this is one section where you will see mostly positive remarks. While I didn’t totally click with Van Helsing the second time around, I must admit the HD-DVD transfer of the film is great. The opening scene, as briefly mentioned above, was a visual treat as the simply blacks and whites attacked my eyes in a delightful manner. The rest of the film used brighter colors obviously mostly focusing on dark blues and light greens. The CGI effects looked amazing in some scenes, but dark and drab in other scenes. This resulted in some of the darker scenes maintaining a level of haziness or fuzziness. I do suppose that if a film is entirely created on a computer, one would expect to see a little bit of this. This does give the film a higher level into the world of fake, but what was overly presented in Van Helsing looks just fine.

The standard Dolby Digital Plus 5.1 Surround Sound Track was great, but seemed like it could have used a bit more touch up before Universal sent this one to the production stage. Dialogue seemed clear in a few scenes, but was overly masked out by the loud action elements causing many scenes were one had to rewind to understand what was going on. The dynamic range though was lovely as we were delivered solid low bass in the quiet scenes, while the more rapid bass in some of the ending scenes kicked the sub up a notch. The overall surrounds were right in order, but the huge negative, as I remembered on the DVD release, is the overly crowded dialogue. It makes me wonder if Universal is starting to just transfer the tracks over without some touch up.

As per the typical HD-DVD release, we are given absolutely zero new features.

I’m completely torn on Van Helsing. As I mentioned above, I enjoyed the film the first time through during the theater exhibition, but found the film to drag a bit during the HD-DVD experience. While the video and audio aspects were slightly cleaned up, the presented video and audio is not up to HD standards. The features are the standard DVD fare, all of which adds up to nothing we haven’t seen before. A fair film, slightly upgraded in terms of video & audio quality, with no new features equals a rental.