The Toolbox Murders is coming to 4K in January 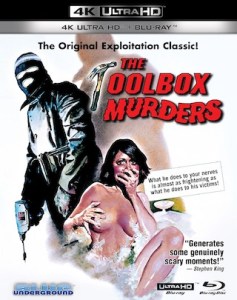 The movie has received a new 16-bit 4K restoration from the original uncut negative. The tech specs for the 4K UHD Blu-ray include a 2160p video presentation in the 1.66:1 aspect ratio with HDR10 and Dolby Vision forms of high dynamic range and Dolby Atmos sound as well as the original DTS-HD Master Audio 1.0 Mono and DTS-HD Master Audio 5.1 lossless surround sound mixes. The release will come in the form of a “combo pack” meaning that the Blu-ray Disc counterpart (in HD) will be included. You cannot yet find the title listed for preorder over at Amazon, but stay tuned for an update. However, in the meantime, you can already find the 4K UHD Blu-ray available for preorder over at DiabolikDVD.

The bonus materials set to be included with the set are listed below.

Further below, after the break, you can find the restored trailer and the full details about the upcoming 4K release.