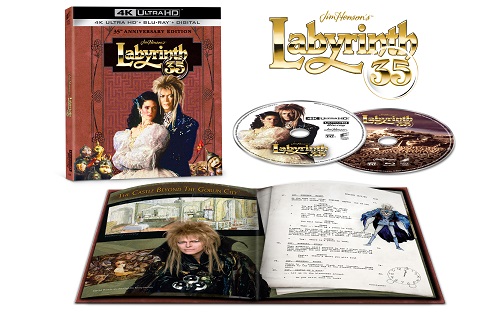 This film has been available on the 4K UHD Blu-ray format since 2016, when it got another anniversary release, however, this new version on 4K will come with some new things. First off, the tech specs include a 2.39:1 aspect ratio 2160p video presentation from a 4K remaster with HDR10 and Dolby Vision (for the first time) as well as Dolby Atmos, DTS-HD Master Audio 5.1 theatrical, and DTS-HD Master Audio 2.0 Stereo sound.

The new 35th Anniversary 4K release will come in the form of a “combo pack” meaning that you’ll get the Blu-ray Disc counterpart and a digital code (copy) of the film included.

UPDATE: as of now, you can find the 35th Anniversary Edition 4K UHD Blu-ray available for preorder over at Amazon. Also, it can be found listed for preorder over at retailer Target. This new release will come with the physical extra of being a DigiBook (digital booklet) that is 28 pages in length. It also will feature some new never-before-released extras and screentests. The bonus materials set to be included with this 2-disc 35th Anniversary Edition 4K UHD Blu-ray are listed below, disc-by-disc, in terms of their contents.

Below, after the break, you can find the full announcement regarding this upcoming 35th anniversary limited edition of the film on the 4K UHD Blu-ray physical format.