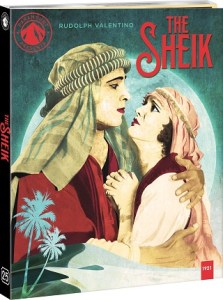 The 1921 silent film “The Sheik“ will officially be coming to Blu-ray Disc on November 2nd, via Paramount Home Entertainment, as part of the Paramount Presents line. This will mark the film’s 100th year anniversary and the release will be spine number 25 in the Paramount Presents line. The film, directed by George Melford, starred Rudolph Valentino and Agnes Ayres. This motion picture has received a new restoration, described below.

“THE SHEIK restoration employed modern technology so viewers can experience the original beauty of this monumental silent film.  Since original negatives for silent films rarely exist, Paramount searched the world for the best elements and used a print and an intermediate element called a fine grain.  One source of the film yielded better results for image quality, another for intertitles.  One of the elements was “stretch-printed” and had to be adjusted digitally during the restoration process.  In the silent era there was no standard frame rate, so stretch printing was done to show silent films at 24 frames per second.  In addition, tints and tones were digitally applied, guided by an original continuity script from the Paramount archive.  The result is the best picture quality THE SHEIK has had since it was originally shown in theaters 100 years ago.”

The tech specs for the release have yet to be fully detailed but you can expect a full 1080p HD video presentation in its original 1.33:1 aspect ratio and a lossless sound mix (presumably in Mono) for the music. Stay tuned for a possible update on that soon. You cannot yet find the Paramount Presents Blu-ray available for preorder over at Amazon, but there is a placeholder page up. The release will come with a digital code (copy) of the film. Bonus materials set to be included on the release have been slightly detailed but not yet fully. It’s known that one featurette will be included as well as the new musical score.

This release, like all of the Paramount Presents Blu-ray titles, will include collectible packaging with fold-out original poster artwork as well as interior artwork (as shown below). 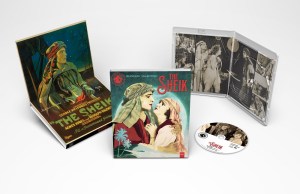