1959 film Some Like It Hot comes to 4K February 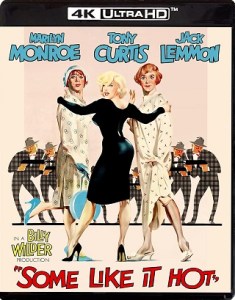 The 1959 classic film “Some Like It Hot“ is officially coming to 4K UHD Blu-ray on February 8th, 2022 via KL Studio Classics. The film, directed, produced, and co-written by Billy Wilder, starred Marilyn Monroe, Tony Curtis, Jack Lemmon, George Raft, Pat O’Brien, and Joe E. Brown. KL Studio Classics had already hinted that this film was coming [next year] in a tweet from earlier this year.

The tech specs for the 4K UHD Blu-ray include a Black & White 2160p video presentation in the original 1.85:1 aspect ratio with HDR10 and Dolby Vision form of high dynamic range with DTS-HD Master Audio 5.1 surround and 2.0 Mono lossless mixes — on a BD-100 disc. The release will come as a “combo pack” with the Blu-ray Disc counterpart included. You can find the 4K UHD Blu-ray available for preorder over at Amazon, directly via KLStudioClassics.com, or over at online retailer Deep Discount. The bonus materials set to be included on each disc of the release are detailed below.