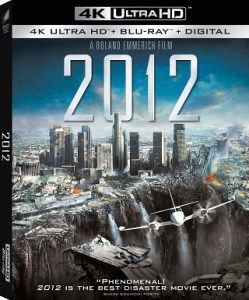 The 2009 disaster film “2012” is officially coming to 4K UHD Blu-ray on January 19th, 2021 via Sony. The film, directed by Roland Emmerich, starred John Cusack, Chiwetel Ejiofor, Amanda Peet, Oliver Platt, Thandie Newton, Danny Glover, and Woody Harrelson. The tech specs for the 4K release include a 2160p presentation in the 2.40:1 aspect ratio with HDR10 form of high dynamic range and Dolby Atmos as well as the original DTS-HD Master Audio 5.1 surround sound. The release will come in the form of a “combo pack” meaning that it will also include the Blu-ray Disc counterpart as well as a digital code (copy) of the film. UPDATE: the 4K UHD Blu-ray is listed now for preorder over at Amazon.

Further below, after the break, you can find the full announcement regarding the upcoming 4K home video release of this film.