Hammer film The Devil Rides Out on Blu-ray 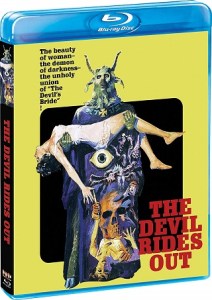 The 1968 Hammer film “The Devil Rides Out“ is coming to Blu-ray Disc on October 29th via Scream Factory. The film, directed by Terence Fisher, starred Christopher Lee, Charles Gray, Nike Arrighi, Leon Greene, Patrick Mower, and Gwen Ffrangcon Davies. Tech specs for the release include 1080p HD video in the 1.66:1 aspect ratio with DTS-HD Master Audio Mono sound. The film is presented in a “NEW 2K scan of the 20th Century Fox interpositive” and also included is the Studio Canal restored master.” The title on Blu-ray is now available for preorder over at Amazon. Bonus materials set to be included on the release have just been revealed today and include the following.

Further below, after the break, you can find the full details regarding this upcoming release.