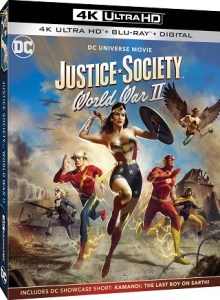 The 2021 DC Universe Movie “Justice Society: World War II” is officially coming to both 4K UHD Blu-ray and Blu-ray Disc on May 11th via Warner Bros. Home Entertainment. The film, from Warner Bros. Animation, directed by Jeff Wamester, features a voice cast of Stana Katic (Wonder Woman), Matt Bomer (The Flash), Matthew Mercer (Hourman), Chris Diamantopoulos (Steve Trevor), Omid Abtahi (Hawkman), Liam McIntyre (Aquaman), Geoffrey Arend (Charles Halstead/Advisor), Elysia Rotaru (Black Canary), and Armen Taylor (Jay Garrick). The tech specs for the 4K UHD Blu-ray include a 4K presentation in the 1.78:1 aspect ratio with HDR10 form of high dynamic range and DTS-HD Master Audio 5.1 sound. The tech specs for the Blu-ray include a 1080p HD presentation in the 1.78:1 aspect ratio and DTS-HD Master Audio 5.1 sound. Both releases will come in the form of a “combo pack” meaning that the 4K version will come with the Blu-ray counterpart, the Blu-ray version will come with the DVD counterpart, and each will include a digital code (copy) of the film. You cannot yet find the 4K UHD Blu-ray or the Blu-ray available for preorder over at Amazon, but stay tuned for an update on that. The bonus materials set to be included with both physical releases of the film are listed below.

Further below, after the break, you can find a glimpse at the Blu-ray cover art, the trailer for the film, and details about the upcoming home video release of it.

END_OF_DOCUMENT_TOKEN_TO_BE_REPLACED 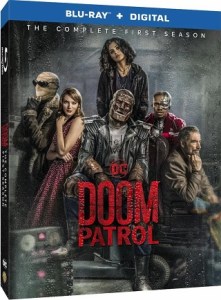