Tag Archives: Kids in the Hall

Kids in the Hall: Brain Candy on Blu-ray February 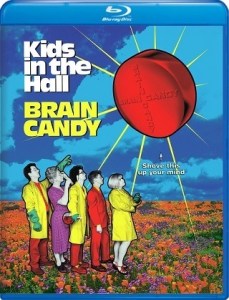 Folks, after long anticipation and procrastination I’m happy to announce that “Kids in the Hall: Brain Candy“ is officially coming to Blu-ray Disc on February 15th via Paramount Home Entertainment, as a MOD (manufactured-on-demand) release. This was a spin-off and the only feature-length film from the popular sketch Canadian comedy troupe and show “The Kids in the Hall“ that originally premiered back in 1988. The film, directed by Kelly Makin, starred the sketch comedy troupe members Dave Foley, Bruce McCulloch, Kevin McDonald, Mark McKinney, and Scott Thompson — all playing numerous roles.

The tech specs for the release include a 1080p HD video presentation (presumably in the 1.85:1 aspect ratio) with DTS-HD Master Audio 5.1 lossless surround on a BD-25 disc.  It has not been clarified if these discs will be pressed or burnt but you’ll be able to preorder the Blu-ray MOD release directly via Movie Znyg. UPDATED:  Also, you’ll be able to buy the Blu-ray over Amazon and retailer Walmart.com, where it’s now available for preorder.

For around 20 dollars (before shipping & tax) you’ll be able to make it “feel like 72 degrees in your head, all the time.” Yes, you, reader! No bonus materials will be included with this release, so hold on to those previous DVD releases, fans.