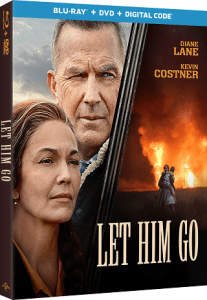 The 2020 film “Let Him Go” starring Diane Lane and Kevin Costner is officially coming to Blu-ray Disc on February 2nd via Universal Studios Home Entertainment. The film, directed by Thomas Bezucha, co-stars Lesley Manville, Kayli Carter, Will Brittain, and Jeffrey Donovan. The tech specs for the Blu-ray release include a 1080p HD video presentation in the 2.39:1 aspect ratio with DTS-HD Master Audio 7.1 sound on a BD-50 disc. The upcoming Blu-ray release will come in the form of a “combo pack” meaning that it’ll include a DVD counterpart and a digital code (copy) of the film. It’s certainly worth noting that, at the time of writing, this film is “Certified Fresh” over at Rotten Tomatoes. You can now find the Blu-ray listed for preorder over at Amazon. The bonus materials set to be included with the release are listed below.

Further below, after the break, you can find the trailer for the film and the full announcement regarding the upcoming home video release of the film.