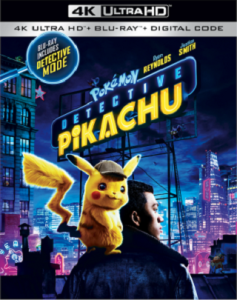 The 2019 film “Pokemon Detective Pikachu” is officially coming to both the 4K UHD Blu-ray and Blu-ray Disc formats on August 6th via Warner. The film, directed by Rob Letterman, features the voice talent of Ryan Reynolds and stars Justice Smith. Tech specs for the 4K UHD Blu-ray include 2160p video in the 2.39:1 aspect ratio with HDR10 form of High Dynamic Range and Dolby Atmos sound. The technical specs for the Blu-ray include 1080p video in the 2.39:1 aspect ratio and Dolby Atmos sound. Both versions will come in the form of “combo pack” with the 4K getting the Blu-ray, the Blu-ray getting a DVD, and a digital copy of the film with each. You can now find the 4K UHD Blu-ray and Blu-ray available for pre-order over at Amazon and at retailer Best Buy. Speaking of retailer Best Buy, they will be getting an exclusive 4K Steelbook for the release which is now available for pre-order. Stay tuned for further updates on this release. Bonus materials set to be included on the releases are listed below.

Further below, after the break, you can find the artwork for the Blu-ray Disc and the full details about the upcoming releases.