1991 film The Silence of the Lambs comes to 4K October 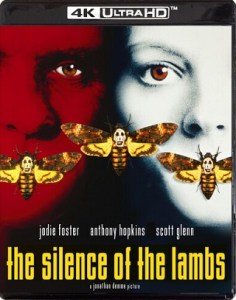 The 1991 film “The Silence of the Lambs“ is officially coming to 4K UHD Blu-ray on October 19th, via KL Studio Classics. The film, directed by Jonathan Demme and based on the novel, starred Jodie Foster, Anthony Hopkins, Scott Glenn, Frankie Faison, and Ted Levine.

The tech specs for the 4K UHD Blu-ray include a 2160p video presentation in the 1.85:1 aspect ratio with HDR10 form of high dynamic range as well as both lossless 5.1 surround and 2.0 stereo sound mixes, on a BD-100. The release will also include the Blu-ray Disc counterpart presented in 1080p HD with the same sound mixes. You can find the 4K UHD Blu-ray now listed for preorder over at Amazon. The bonus materials set to be included on the 4K and Blu-ray Disc in this set are listed below.