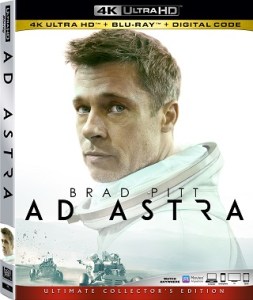 The 2019 Sci-Fi film “Ad Astra” with Brad Pitt is officially coming to 4K UHD Blu-ray and Blu-ray Disc on December 17th, via Fox. The film, directed by James Gray, co-stars Tommy Lee Jones, Ruth Negga, Liv Tyler, and Donald Sutherland. Tech specs for the 4K include 2160p video in the 2.39:1 aspect ratio with HDR10 form of a High Dynamic Range and Dolby Atmos sound. The tech specs for the Blu-ray include 1080p HD video in the 2.39:1 aspect ratio and DTS-HD 7.1 Master Audio sound. The 4K will come in the form of a “combo pack” getting its Blu-ray counterpart. Both the 4K and Blu-ray versions will each be receiving a digital code (copy) of the film. You can find the 4K UHD Blu-ray and the Blu-ray are now both available for preorder over at Amazon. The bonus materials set to be included are listed below.