The Secret Life of Pets 2 on 4K and Blu-ray 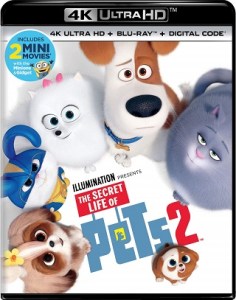 The 2019 Illumination animated sequel “The Secret Life of Pets 2” is coming to 4K UHD Blu-ray and Blu-ray Disc on August 27th via Universal, according to multiple retail listings. The film, directed by Chris Renaud and Jonathan del Val, features the voice talents of Patton Oswalt, Kevin Hart, Harrison Ford, Eric Stonestreet, Jenny Slate, Tiffany Haddish, Lake Bell, Dana Carvey, Bobby Moynihan, Hannibal Buress, and Nick Kroll. Tech specs for the 4K release include 2160p video in the 1.85:1 aspect ratio presented in HDR10, HDR10+, and Dolby Vision forms of High Dynamic Range and Dolby Atmos sound. The technical specifications for the Blu-ray release include 1080p HD video in the 1.85:1 aspect ratio and Dolby Atmos sound. Both releases will come in the form of “combo pack” with the 4K getting a Blu-ray included, the Blu-ray getting a DVD included, and both receiving a digital copy (digital code) of the film. Both the 4K UHD Blu-ray and Blu-ray are available for pre-order over at Amazon and at retailer Best Buy. Bonus materials set to be included on the releases are roughly detailed and listed below.

Stay tuned for an update on the specific bonus materials when a press release drops from the studio (Universal). In the meantime, it is very much worth noting that there will be a 4K Steelbook release for the film exclusive to retailer Best Buy which is now available for pre-order (pictured below).

Lastly, there will also be a “The Secret Life of Pets: 2-Movie Collection“ set available only on Blu-ray released the very same day (August 27th) which is also now available for pre-order over at Amazon. 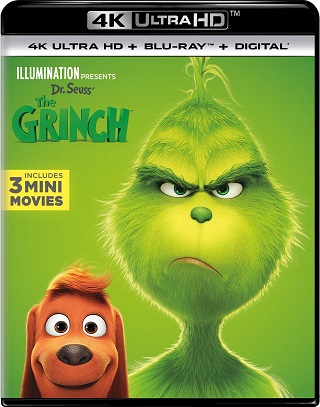 The 2018 Illumination CG animated film “The Grinch” featuring the voice talent of Benedict Cumberbatch is coming to 4K UHD Blu-ray, Blu-ray Disc, and Blu-ray 3D on February 5th via Universal. The film, based on a book by Dr. Seuss, was directed by Yarrow Cheney and Scott Mosier. This animated film also features the voice talents of Pharrell Williams, Rashida Jones, Cameron Seely, Angela Lansbury, and Kenan Thompson.

Tech specs for the 4K release include 2160p in the 2.39:1 aspect ratio, on a BD-100, in both Dolby Vision and HDR10 forms of High Dynamic Range with Dolby Atmos and Dolby Digital 5.1 sound. The tech specs for the Blu-ray and Blu-ray 3D include 1080p in the 2.39:1 aspect ratio, each on a BD-50, with Dolby Atmos and Dolby Digital 5.1 sound. Each release will come in the form of a “combo pack” with the 4K getting a Blu-ray Disc included, the Blu-ray getting a DVD included, the Blu-ray 3D getting a Blu-ray, and a Movies Anywhere compatible Digital Copy of the film included on each. You can find the 4K UHD Blu-ray, the Blu-ray Disc and the Blu-ray 3D available to pre-order over at Amazon. Bonus materials set to be included on the releases are listed below.