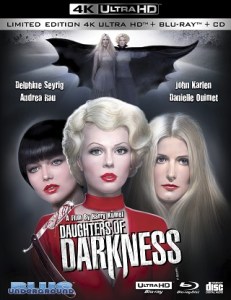 1971 film Daughters of Darkness on 4K in October

The 1971 Harry Kümel directed horror film “Daughters of Darkness“ is officially coming to 4K UHD Blu-ray on October 27th, via Blue Underground. The film’s cast included Delphine Seyrig, John Karlen, Danielle Ouimet, Andrea Rau, and Paul Esser. The release, a limited edition set, will include the Blu-ray counterpart as well as a CD of the film’s original soundtrack. Tech specs for the release include a 2160p 4K video presentation in the original 1.66:1 aspect ratio with HDR10 and Dolby Vision forms of High Dynamic Range as well as Dolby Atmos sound. Other sound formats & configurations include DTS-HD Master Audio 5.1 and 1.0 Mono mixes. This comes from a 4K 16-bit restoration using the original 35mm film camera negative.

The list of bonus materials set to be included are listed below.

Further below, after the break, you can find the full announcement regarding this upcoming 4K UHD Blu-ray release.