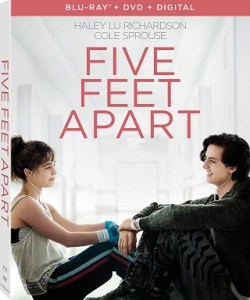 The 2019 romantic drama “Five Feet Apart“ starring Haley Lu Richardson and Cole Sprouse is coming to Blu-ray Disc on June 11th via Lionsgate. The film, directed by Justin Baldoni, co-stars Moises Arias, Kimberly Hebert Gregory, and Parminder Nagra. Tech specs include 1080p video in the 2.39:1 aspect ratio and DTS-HD 5.1 Master Audio sound. The release will come in the form of a “combo pack” with a DVD and a digital copy of the film included. The Blu-ray is now available to pre-order over at Amazon and Best Buy. Bonus materials set to be included on the release are listed below.

Further below, after the break, you can find the trailer and more information about this upcoming release.