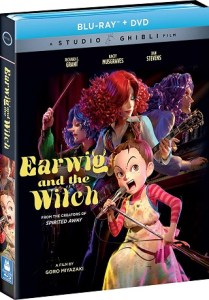 The 2020 Studio Ghibli animated feature film “Earwig and the Witch” is officially coming to Blu-ray Disc in North America on April 6th via GKIDS, distributed by Shout! Factory. The CG animated film, a first for the studio, was directed by Goro Miyazaki and features an English dub voice cast that includes Richard E. Grant, Kacey Musgraves, and Dan Stevens. The original Japanese language track will be included as well with this release, featuring English subtitles. Tech specs for the release have yet to be detailed but stay tuned for a possible update on that. The release will come as a “combo pack” meaning that it will include its DVD counterpart. Not only will there be a standard Blu-ray release, but there will also be a limited edition Blu-ray Disc SteelBook available (pictured below).

Both the standard Blu-ray Disc and the limited edition Blu-ray SteelBook are now available for preorder over at Amazon. The bonus materials set to be included with each Blu-ray release of the film are listed below.

Further below, after the break, you can find the official English trailer for the film and full details about the North American home video release of the film.