“Dracula: Prince of Darkness” with Christopher Lee on Blu-ray in December 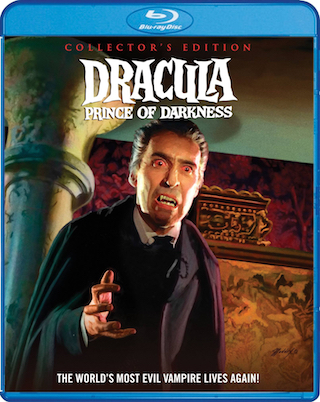 Hammer Films‘ 1966 horror classic “Dracula: Prince of Darkness” starring Christopher Lee is coming to Blu-ray Disc in a “Collector’s Edition” on December 18th via Scream Factory (Shout! Factory). Tech specs and bonus materials have not yet been fully detailed, but they have plans to in the coming months, as announced today on social media. It is confirmed that a new HD transfer is being done for the film, as you can read below (taken from a Facebook post).

• The newly-commissioned artwork pictured comes to us from artist Mark Maddox. This art will be front-facing and the reverse side of the wrap will showcase the original theatrical poster art design.

• Extras are still underway and will be announced later in Nov. We are reconfirming today though that we have an all-new High-Def transfer in the works.

There’s no pre-order listing available yet for this release over at Amazon, however, you can pre-order directly from Shout! Factory – where you’ll get an added bonus in the form of 18″ X 24″ poster. Only 500 of those posters are being produced though, so act fast if you want that for free. More details as they come on this release. Stay tuned.