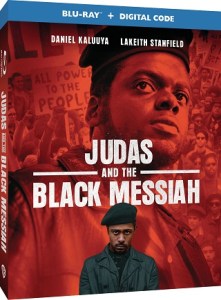 The Academy Award-nominated 2021 film “Judas and the Black Messiah” is officially coming to Blu-ray Disc on May 4th via Warner Bros. Home Entertainment. The film, directed by Shaka King, stars Daniel Kaluuya, LaKeith Stanfield, Jesse Plemons, Dominique Fishback, Ashton Sanders, and Martin Sheen. It’s worth noting, at the time of writing this, that this film is “Certified Fresh” over at Rotten Tomatoes. The tech specs for the film on Blu-ray include a 1080p HD presentation in the 2.39:1 aspect ratio with DTS-HD Master Audio 5.1 lossless surround sound. The release will come with a digital code (copy) of the film. UPDATE: You can now find the Blu-ray available for preorder over at Amazon, and expect that price to drop. However, remember that Amazon offers a “Pre-order Price Guarantee” which should have you covered.

EDITORIAL NOTE: Sadly, no there will not be a 4K physical release here in the United States of the film, it would appear. That’s a shame, as it aired on HBOMax earlier this year in 4K UHD with HDR10 and Dolby Vision as well as with Dolby Atmos sound. Maybe, if this film takes home some “Oscars” in the 6 categories it is nominated for, namely Best Picture, later this year, it might receive a 4K UHD Blu-ray release with all of that mentioned. One would speculate?

Further below, after the break, you can find the full information regarding the home video releases of this film.