“The Intruder” with Dennis Quaid on Blu-ray in July 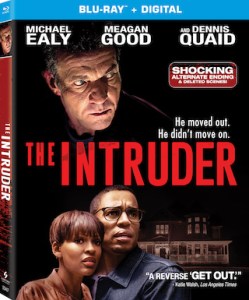 The 2019 horror film “The Intruder“ is officially coming to Blu-ray Disc on July 30th via Sony. The film, directed by Deon Taylor, stars Michael Ealy, Meagan Good, Joseph Sikora, and Dennis Quaid. Tech specs for the Blu-ray release include 1080p HD video in the 2.35:1 aspect ratio and DTS-HD 5.1 Master Audio sound. The Blu-ray will come with a digital copy of the film. You can find Blu-ray available for pre-order now over at Amazon and Best Buy. Bonus materials set to be included on this release are listed below.

Further below, after the break, you can find the trailer for the film and the official announcement regarding this upcoming Blu-ray Disc release.