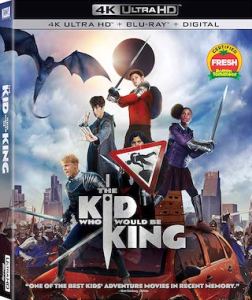 The 2019 film “The Kid Who Would Be King” written and directed by Joe Cornish is heading to both 4K UHD Blu-ray and Blu-ray Disc on April 16th, via Fox. The film features a cast of Louis Ashbourne Serkis, Denise Gough, Dean Chaumoo, Tom Taylor, Angus Imrie, Rhianna Dorris, Nathan Stewart-Jarrett, Noma Dumezweni, and Rebecca Ferguson. It’s worth noting that this movie is currently (at time of writing) “Certified Fresh” over at Rotten Tomatoes.

Tech specs for the 4K release include 2160p video with High Dynamic Range in the 2.39:1 aspect ratio and Dolby Atmos sound. The tech specs for the Blu-ray release include 1080p video in the 2.39:1 aspect and 7.1 lossless sound (likely DTS-HD MA) but mislabeled in the press release. Both of the releases will come in the form of “combo pack” with the 4K getting a Blu-ray, the Blu-ray getting and DVD, and each getting a digital copy of the film. The 4K UHD Blu-ray and Blu-ray Disc are now both available for pre-order over at Amazon. Bonus materials set to be included on the releases are listed below.

Further below, after the break, you can find the Blu-ray Disc artwork and more info in the official announcement.

END_OF_DOCUMENT_TOKEN_TO_BE_REPLACED 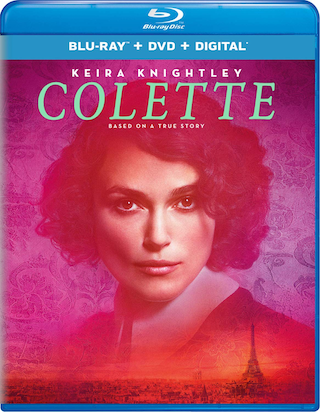 The 2018 Wash Westmoreland directed film “Colette“ starring Keira Knightley is coming to Blu-ray Disc on December 11th via Universal, according to an early alert to retailers. The film, based on a true story, co-stars Eleanor Tomlinson, Dominic West, Fiona Shaw, Aiysha Hart, and Denise Gough. This movie has received positive reviews from the critics during its theatrical run. In fact, it’s “Certified Fresh” over at Rotten Tomatoes, at time of writing, with a 86% rating from critics.

Tech specs for the Blu-ray release include 1080p video in the 2.39:1 aspect ratio and DTS-HD 5.1 Master Audio sound. The Blu-ray release will come in the form of a “combo pack” with a DVD and Digital Copy of the film included. You can find this Blu-ray available already for PRE-ORDER over at Amazon. Bonus materials set to be included on the release are listed below.