Superman The Animated Series on Blu-ray in October 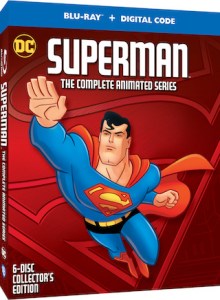 “Superman: The Animated Series” will finally be officially coming to Blu-ray Disc, for the very first time, on October 26th via Warner Bros. Home Entertainment. The release will come as “Superman: The Complete Animated Series“ (Collector’s Edition) on Blu-ray. The animated TV series ran from 1996 through 2000 and featured the voices of Tim Daly (as “Superman” / “Clark Kent”), Dana Delany (as “Lois Lane”), David Kaufman (as “Jimmy Olsen”), and Clancy Brown (as “Lex Luthor”).

The tech specs for the release include a 1080p HD video presentation in the 1.33:1 aspect ratio and a lossless sound mix, presumably in DTS-HD Master Audio 2.0 Stereo, spanning across a 6-disc set. They’ve actually gone to some really great lengths to remaster the show, as you can read below.

“All 54 episodes have been remastered from the original 35mm Interpositive sources, giving special attention to extensive color correction, dirt and scratch clean up, and adding a grain reduction pass to create a pristine picture, all while making sure not to affect the original lines in the artwork of the animation. The audio was retransferred from the original audio masters, and the series is presented in its original aspect ratio (4×3).”

The release will come with a digital code (copy) of all three seasons of the TV series. The bonus materials set to be included on this set are listed below.

Further below, after the break, you can find the full details about this Blu-ray box set.