His Dark Materials Second Season on Blu-ray in June 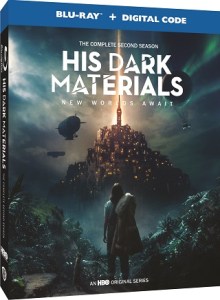 The HBO original series “His Dark Materials: The Complete Second Season” is officially coming to Blu-ray Disc on June 29th via Warner Bros. Home Entertainment. The fantasy TV series features a cast of Dafne Keen, Amir Wilson, Kit Connor, Ruth Wilson, Ariyon Bakare, Andrew Scott, Will Keen, Ruta Gedmintas, and Lin-Manuel Miranda. The tech specs for the Blu-ray release include a 1080p HD video presentation in the 1.78:1 aspect ratio with DTS-HD Master Audio 5.1 lossless surround sound, on two BD-50 discs. The release will come with a digital code (copy) of the second season. You can now find the Blu-ray listed for preorder over at Amazon. The bonus materials set to be included with this release are listed below.

Below, after the break, you can find the full announcement regarding the home video release of the second season of this TV series.