The Original Kings of Comedy on Blu-ray in November 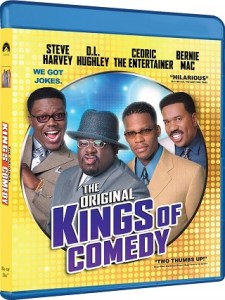 The 2000 stand-up comedy concert film “The Original Kings of Comedy“ will be making its debut to the Blu-ray Disc format on November 10th via Paramount. The film, directed by Spike Lee, featured stand-up routines from Steve Harvey, D.L. Hughley, Cedric The Entertainer, and the late great Bernie Mac. It also featured glimpses into their lives backstage, in a documentary-type style.

This release will come in the form of a MOD (manufactured-on-demand) BD-ROM Blu-ray Disc if you order it via Amazon. However, if you find this on store shelves elsewhere or online elsewhere, it will be a pressed Blu-ray Disc. I was given this heads-up regarding the release as well as a very short bit of info as to what all went into the remastering of the film for this release. You can find a quote regarding that below.

“[This film was] recently remastered in HD, and was supervised by the film’s producer. It’s a BD-ROM now on Amazon MOD and pressed everywhere else. More Paramount catalog titles will be done this way and are coming very soon to Blu-ray.”

UPDATE: The tech specs for the release will include a 1080p HD video presentation in the original 1.78:1 aspect ratio with a DTS-HD Master Audio 5.1 surround sound mix.

You can now find this film’s debut to Blu-ray available for preorder now over at Amazon. At the time of writing, no other retailers are listing the Blu-ray just yet but stay tuned for an update. Lastly, regarding bonus materials, here’s what Amazon lists regarding the product, which makes a nice mention of the film being on the format for the very first-time as well as gives us a hint of what to expect in terms of extras.