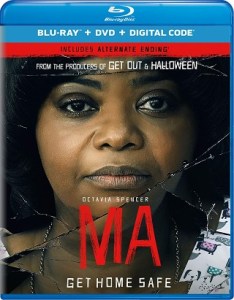 The 2019 film “Ma“ starring Octavia Spencer is coming to Blu-ray Disc on September 3rd via Universal, according to multiple retailers. The film, directed by Tate Taylor and produced by Jason Blum, co-stars Diana Silvers, Juliette Lewis, McKaley Miller, Corey Fogelmanis, Gianni Paolo, Dante Brown, and Luke Evans. Tech specs for the Blu-ray include 1080p HD video in the 2.35:1 aspect ratio with DTS-HD 5.1 Master Audio sound. The release will come in the form of “combo pack” with a DVD and a digital copy (digital code) of the film included. You can now find the Blu-ray available for pre-order over at both Amazon and at retailer Best Buy. Bonus materials set to be included on the release are listed below.