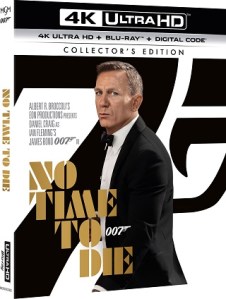 The 2021 James Bond film “No Time to Die” is officially coming to 4K UHD Blu-ray and Blu-ray Disc on December 21st via MGM (distributed by Universal Studios Home Entertainment). The film, directed by Cary Joji Fukunaga, starred Daniel Craig (in his final role as “Bond”), Léa Seydoux, Rami Malek, Lashana Lynch, Ralph Fiennes, Ben Whishaw, Naomie Harris, Jeffrey Wright, and Christoph Waltz. It is most certainly worth noting that this is “Certified Fresh” over at Rotten Tomatoes at the time of writing.

The tech specs for the 4K UHD Blu-ray include a 2160p video presentation in the 2.39:1 aspect ratio with HDR10 and Dolby Atmos sound, on a BD-100 disc. Tech specs for the Blu-ray include a 1080p HD video presentation in the 2.39:1 aspect ratio with Dolby Atmos sound. Both releases will come in the form of a “combo pack” meaning that the 4K will include its Blu-ray counterpart, the Blu-ray will include its DVD counterpart, and both will come with a digital code (copy) of the film — compatible with Movies Anywhere. You can now find the 4K UHD Blu-ray and Blu-ray both available for preorder over at Amazon.

Retailer Best Buy will also be getting an exclusive 4K UHD Blu-ray SteelBook (pictured below) which is now available for preorder. 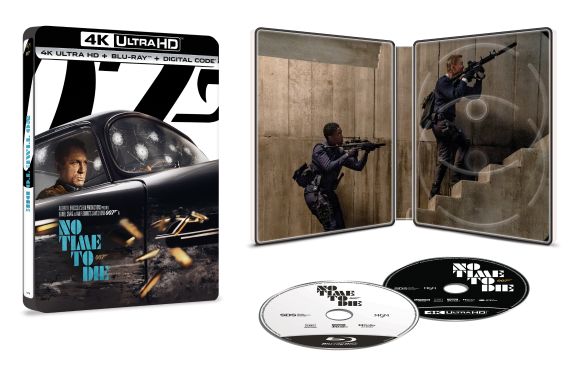 Further below, after the break, you can find the official trailer for the film and the full announcement about the home video release.