RoboCop: The Series from 1994 on Blu-ray in May 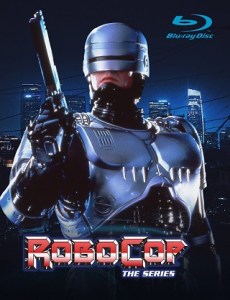 The 1994 TV show “RoboCop: The Series“ is officially coming to Blu-ray Disc for the very first time in the United States on May 10th via Liberation Hall.  The show, which ran for a total of 23 episodes (counting a 2-part pilot episode), starred Richard Eden, Yvette Nipar, Blu Mankuma, Lisa Madigan, Sarah Campbell, David Gardner, and Andrea Roth.

The tech specs for the release include a 1080p HD video presentation in the 1.77:1 aspect ratio and uncompressed Linear PCM 2.0 Stereo sound, spanning across a 5-disc set.  Regarding the aspect ratio being in widescreen, here on Blu-ray, the distributor has noted this:

“Source material for the Blu-ray was taken from original vault elements and is now formatted for 16:9 screens.”

UPDATE:  You can now find the Blu-ray set of RoboCop: The Series available for preorder over at Amazon.  The bonus materials set to be included with this release are listed below.

Further below, after the break, you can find a glimpse at the contents of the set, the promo video, and official announcement for this upcoming Blu-ray release of the 1994 TV series.