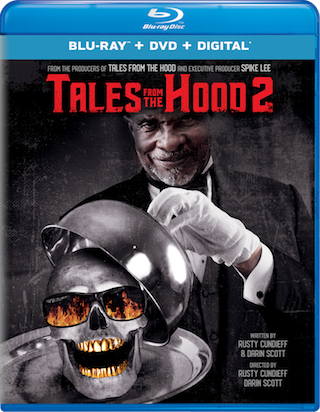 The 2018 direct-to-video Spike Lee executive produced sequel “Tales from the Hood 2“ is coming to Blu-ray Disc on October 2nd via Universal. The film was co-directed by Rusty Cundieff and Darin Scott, writers of the original 1995 film. It’s worth noting, that co-writer / co-director Rusty Cundieff is not only known for directing the first film, but also for directing a bulk of the TV series “Chappelle’s Show” (2003-2006). The sequel “Tales from the Hood 2” stars Keith David, Bryan Batt, Lou Beatty Jr., Alexandria DeBerry, Bill Martin Williams, Martin Bradford, and Kendrick Cross.

Tech specs include full 1080p HD video in the 1.78:1 aspect ratio and DTS-HD 5.1 Master Audio sound. The release will come in the form of a “combo pack” with a DVD and a Digital Copy of the film included. The title is available for PRE-ORDER now over at Amazon. No bonus materials will be included. Lastly, you can find the trailer and official announcement for the release after the break below.