1958 Orson Welles film Touch of Evil on 4K in February 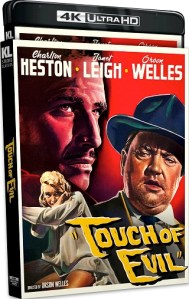 This has received a new 4K restoration of the original Theatrical Cut, the “Reconstructed Cut,” and the “Preview Cut.” The tech specs for the release include a Black & White 2160p video presentation in Dolby Vision and HDR10 forms of high dynamic range. Each version of the film should theoretically be receiving a lossless Mono sound mix — although they have not been detailed. Also, the aspect ratio has not been specified if it will be in the 1.37:1 negative or the 1.85:1 intended ratios. Stay tuned for an update on all of that hopefully soon? The release will span across a 3-disc set with one BD-100 (triple-layer 100 gigabytes) disc for each version of the film.

DISC 1
DISC 2
DISC 3
As an Amazon Associate, I earn from qualifying purchases.