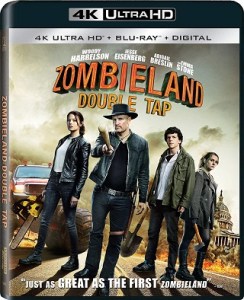 The 2019 sequel “Zombieland: Double Tap” is officially coming to 4K UHD Blu-ray and Blu-ray Disc on January 21st, 2020 via Sony. The film, directed by Ruben Fleischer, features a cast of Woody Harrelson, Jesse Eisenberg, Emma Stone, Abigail Breslin, Zoey Deutch, Rosario Dawson, Luke Wilson, Avan Jogia, and Thomas Middleditch. Tech specs for the 4K release include IMAX Enhanced video in the 2.39:1 aspect ratio with HDR10 form of high dynamic range and DTS:X sound. The tech specs for the Blu-ray include 1080p video in the 2.39:1 aspect ratio and DTS-HD 5.1 Master Audio sound. Both releases will come in the form of a “combo pack” with the 4K getting the Blu-ray counterpart, the Blu-ray getting a DVD, and each getting a digital code (copy) of the film included. You can now find both the 4K UHD Blu-ray and the Blu-ray Disc available for preorder over at Amazon. It should also be noted that retailer Best Buy will be getting an exclusive 4K UHD Blu-ray SteelBook for the release (pictured below) that is also now available for preorder. 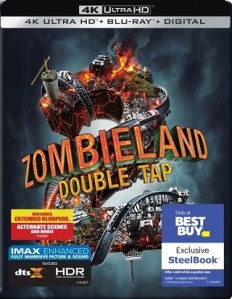 The bonus materials set to be included on these releases are listed below.

END_OF_DOCUMENT_TOKEN_TO_BE_REPLACED 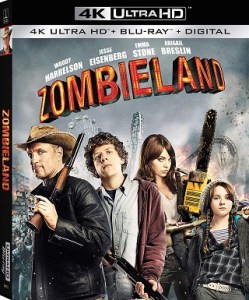 The 2009 film “Zombieland“ will be celebrating its 10th anniversary by coming to 4K UHD Blu-ray on October 1st via Sony, as well as getting a sequel later this year. The film, directed by Ruben Fleischer, starred Woody Harrelson, Jesse Eisenberg, Emma Stone, and Abigail Breslin. Tech specs for the 4K release include 2160p video in the 2.39:1 aspect ratio using the HDR10 form of High Dynamic Range with Dolby Atmos and DTS-HD 5.1 Master Audio sound. The release will come in the form of a “combo pack” with the original Blu-ray Disc included as well as a digital copy of the film. The 4K UHD Blu-ray now is available for pre-order over at Amazon. Bonus materials set to be included on the release, including some new content on the 4K disc, are listed below.