Fellini film La Dolce Vita back on Blu-ray in February 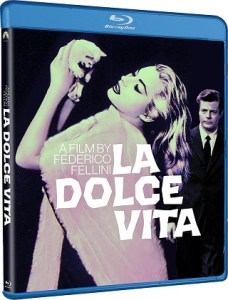 NOTE: The film had previously been released on the Blu-ray format, by The Criterion Collection, but that version has been OOP [out of print] for quite some time. So, that’s why I say that a standard release is coming. However, this is using the exact same restoration from 2011 from The Film Foundation. You can find more about that below, taken from the press release.

The tech specs and bonus materials for the release have not yet been fully detailed but it is known that it will include a new video introduction by filmmaker Martin Scorsese, detailed below.

“The release will include a brand-new introduction by renowned filmmaker Martin Scorsese, who shares his thoughts on the film and its indelible impact on cinema.”

Regarding tech specs, theoretically (based on the previous Criterion Blu-ray release), you can expect a Black & White 1080p HD video presentation in the 2.35:1 aspect ratio and a lossless Mono sound mix. You can now find the Paramount Blu-ray available for preorder over at Amazon and at retailer Best Buy.

Below, after the break, you can find the announcement regarding this upcoming Paramount Blu-ray release of the film.