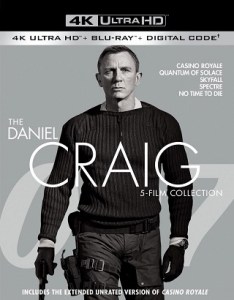 There will be a “James Bond: The Daniel Craig 5-Film Collection“ coming to 4K UHD Blu-ray on March 1st via MGM, according to multiple retailers.  The set will include all five films in which actor Daniel Craig portrayed the character “James Bond” (aka “007”).  Those films consist of the following, in chronological order and detailed (how they appear here) below.

The tech specs for the five films included here are as follows.  All five films appear to be receiving 2160p video presentations in their 2.39:1 aspect ratios with HDR10, Dolby Vision, and HDR10 forms of high dynamic range.  This will be new for the first four films in the set since they have previously been released on the format without the latter HDR formats.  In terms of sound.  First off, “Casino Royale”, “Quantum of Solace”, and “Skyfall” will all three be presented in DTS-HD Master Audio 5.1 lossless surround sound.  Next, the fourth film “Spectre” will be presented in DTS-HD Master Audio 7.1 lossless surround sound and the final film “No Time To Die” will be presented in Dolby Atmos sound.  The release will come in the form of a “combo pack” meaning that it will include its Blu-ray Disc counterparts and likely the bonus discs in that format for each film.  There also will be digital codes (copies) of the five films included.

You can now find the 4K UHD Blu-ray available for preorder over at Amazon as well as at retailers Target and Walmart.  The bonus materials should be identical to those found on the previous 4K releases of each film.  Stay tuned for a full list when the set gets officially announced by MGM via whichever studio will be distributing it.  Speaking of which, the only logo on the back artwork is SDS (Studio Distribution Services) which is a joint venture between Universal Studios Home Entertainment and Warner Bros. Home Entertainment.  So, that’s likely one of the two studios that will be serving as the distributor(s).