Baseball: A Film by Ken Burns comes to Blu-ray in April 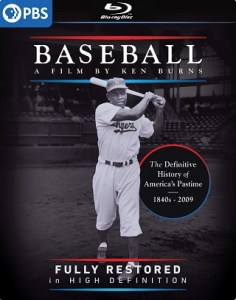 “Baseball: A Film by Ken Burns” is coming to Blu-ray on April 13th via PBS direct. The Emmy award-winning documentary mini-series, directed by Ken Burns, originally aired in 2004 on PBS and in 2010 the series received “The Tenth Inning” as a 2-part additional episode. According to all retailers, this Blu-ray set will include that additional episode, as it carries the very same runtime as the previous DVD release. This documentary mini-series has been “fully restored in high definition” as touted on the cover art (pictured above). The tech specs for the release include a 1080p HD presentation, said to be in a widescreen aspect ratio, with Dolby Digital 5.1 surround sound on an 11-disc set. The bonus materials should be identical to those found on the previous DVD release, which included over 2 and a half hours of special features. No additional information is known about the high definition restoration at this time, as even PBS hasn’t listed it on their official store. You can however find the Blu-ray set now available for preorder over at Amazon as well as at retailers Best Buy, Target, and Walmart.